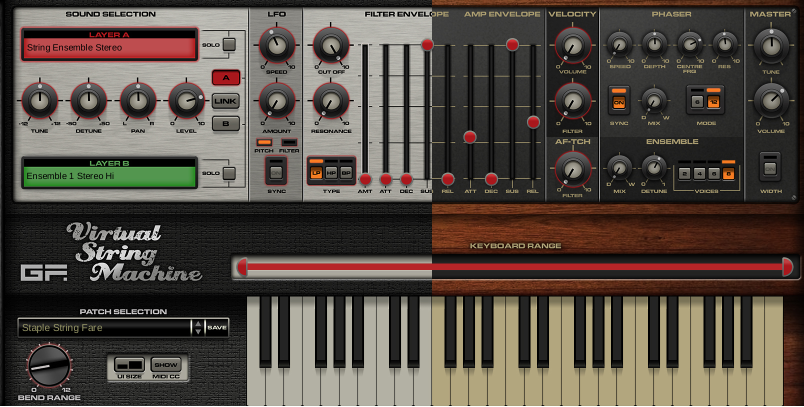 To coincide with the update of VSM to version 3.0 and to take advantage of the stereo playback now offered, we’ve taken the opportunity to double the size of the VSM Expansion Pack library to nearly 5Gb by including a huge variety of string tones we feel compliment those previously available. You’ll now find additional string tones from the Mellotron, Orchestron, Roland’s JP-6, JP-8000 and VP-330, the majestic OB 8-Voice and (less majestic) OB-12, along with additions from the Yamaha CS-60 and SY-2. Many of these new sounds have been recorded using various vintage effects to extend their usefulness but also to add a richness of character and possibility when used within VSM.

With the plethora of string machines and multi-keyboards produced throughout the 70s and early 80s it would be almost impossible to include every string-type instrument within VSM. But with the VSM Expansion Pack containing instruments sourced and recorded over a seven year period, and its latest update library, we believe we’re offering the largest single collection of string ensemble type sounds available within any digital format.

Not only that, we think the sounds of several iconic machines are worth the purchase price alone. Where else can you find the classic band-pass tones of Yamaha’s mighty GX-1 along with Moog’s masterpiece Vox Humana, and with the ability to combine them in a single patch should you wish?

The VSM Expansion Pack contains a raft of vintage string sounds from a veritable treasure trove of rare, iconic and highly desirable instruments, together with the occasional also-ran. What all of these instruments have in common though is character, whether it’s the cold, stark tones of the Elektronika or the layers of lushness that emanate from the Logan String Melody II.

Everyone knows we love our Oberheim 8-Voice almost to the point of absurdity. The SEM is an instrument which is fundamentally simple and yet in it’s 8-Voice configuration it can be incredibly complex. However, if you want to use it as an 8-voice polysynth with a single, uniform sound across all notes it’s a bit of a bastard because setting up each SEM identically is nigh impossible. So we rarely do that. Instead, we use it in ‘Unison Mode’.    Unison stacks all 8 SEMS (16 VCOs) and by programming each with different timbres, filters sweeps, envelopes, pan positions etc, you can then replay a resultant mega-patch via a single note-on. This is where the beauty of the beast is found, in a monophonic yet gigantic texture.   While we stuck to String Ensemble type sounds for this VSM Expansion Pack 2, we did record the 8-Voice using Unison Mode. Why? Because, for the first time, we could then play these unison patches back polyphonically via VSM.