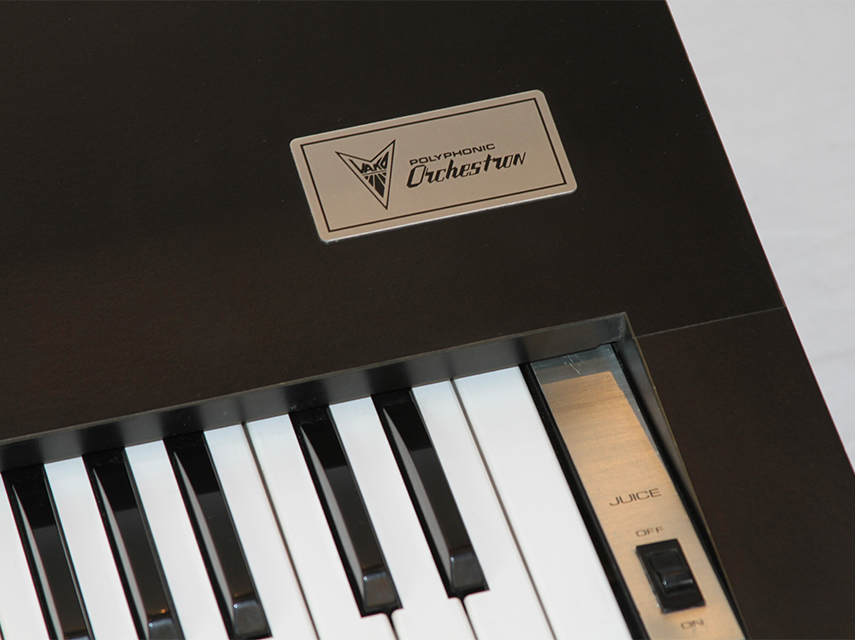 Initially developed by the same company responsible for the Optigan, the technology was adopted by ex-Moog super salesman David Van Koevering and under the company name VaKo he launched the Orchestron in the mid 1970’s as a potential alternative to the Mellotron.

The main advantage the Orchestron offered over the Mellotron was increased portability and a lack of 8 second note limitation due to the continual waveforms on the optical discs.

We love the Orcheston for several reasons. Firstly, it’s a madcap instrument and represents the pioneering spirit so evident in this industry during the 1970s. Secondly, the On/Off switch is named ‘Juice’.

In theory this was a good idea because, reliability aside, Mellotrons were indeed cumbersome and musicians had tried all manner of new playing techniques to disguise its 8 second limitation. However, there was one key area where the Mellotron was always going to win. Namely, the sound. Compared to the Optigan and Orchestron even the most road-battered Mellotron sounded positively hi-fi but, to be fair, the Orchestron has a character of its own which is best defined as grainy as per the Optigan.

The Orchestron did away with the Optigan’s cheesy backing tracks opting instead to provide a selection of discs containing sounds such as Choir, Violins, Cello, Organs (Hammond and Pipe Organ) French Horn and Saxophone.

We love the Orcheston for several reasons. Firstly, it’s a madcap instrument and represents the pioneering spirit so evident in this industry during the 1970s. Secondly, the On/Off switch is named ‘Juice’.

Thirdly, while that sound is grainy and lo-fi, like the Mellotron, Chamberlin and Optigan, just playing a single note evokes a nostalgic vibe capable of giving the most jaded synth-head immediate goosebumps.

Any Kraftwerk fan playing the choir disc will immediately recognise the sound from classic tracks.

Why? Well any Kraftwerk fan playing the choir disc will immediately recognise the sound from classic tracks such as Europe Endless. Similarly due to the Orcheston’s use on Yes’ Relayer album, even the prog fraternity will feel the same way.

Sadly though, despite the Orcheston being adopted by a wealth of artists and desite several models and revisions ranging from the basic and initial Model A to the unbelievably exotic and spacey looking Model X-Phase 4, the Orchestron wasn’t a success and VaKo ceased trading some time in the late 70s.

Not alone in our appreciation of the esoteric.

We love our Orchestron and it’s not necessarily a dead-end instrument either. Because aside from keeping the spirit of the Optigan alive via his optigan.com website, Pea Hicks occasionally releases new discs for the Orchestron too. Some of these are reissues of the originals (a boon for those of us who have occasionally been careless with ours) and some are entirely new, such as the recent Tara Busch vocal one. But the fact that people like Pea are still dedicated to such a madcap instrument, proves we are not alone in our appreciation of the esoteric. That’s somewhat reassuring.

The Orchestron Expansion Pack for M-Tron Pro owners is available from our shop.