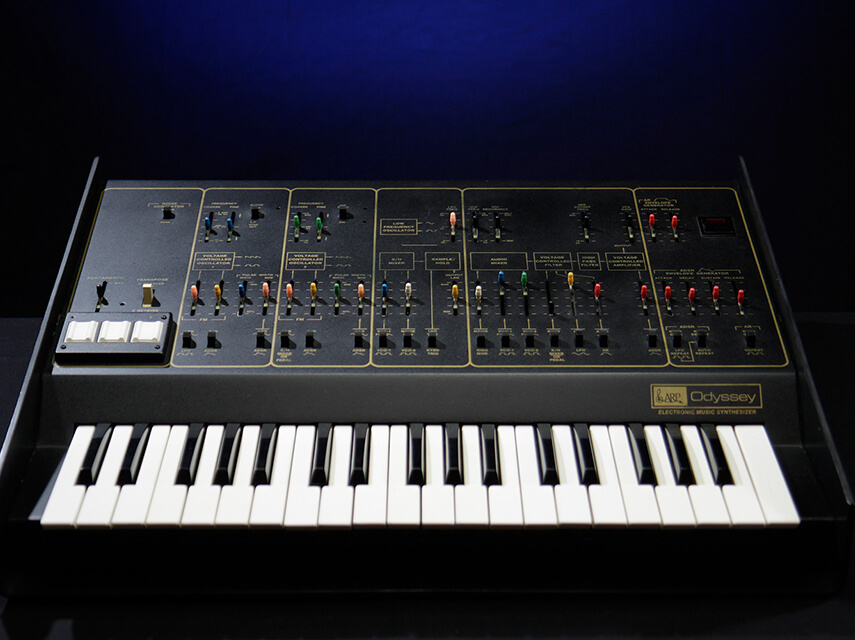 Its place in synth folklore is assured and very well-deserved, but due to the small numbers produced and the desirability of the instrument the chances of finding one in good working order nowadays for less than a king’s ransom is slim.

The Oddity takes all that was unique and great about this instrument and thanks to a painstaking emulative process brings these qualities into the modern age. Now you can finally have those famously aggressive, funky and searing Odyssey tones and exclusive ARP operational method combined with reliable tuning, non-breakable sliders and, something only dreamed about in the 1970’s….patch memories.

Morph between any two saved patches

In fact the Oddity takes the ability to store patches one step further and allows you to morph between any two saved patches within a 64-patch bank. Simply pick a start patch, a morph-time and a destination patch, and the Oddity will output some amazing and inspirational sounds all of which can be recorded by your host sequencer for subsequent playback. Furthermore, the Oddity has a unique Flying Slider feature whereby you can grab one or more sliders and throw them, recording their movements if desired.

This is an aficionado’s plug-in…..a product for synth connoisseurs. It feels more like a labour of love than an attempt to rule the world of soft synths with a Great Big Commercial Hit; somebody put a lot of time into getting the details right.

Of course, because The Oddity was created by Odyssey aficionados much of what gave the original instrument its character and functionality was built-in too. For example, the way the ring modulator and duophonic mode interact to create those classic sublime aggressive tones was carefully modelled, as was the effect the Lag Generator has on a keyboard triggered LFO.

Don’t think the Oddity is a piece of laboratory kit designed solely for geeks and mad scientists. It’s more a thoroughbred instrument and you’ll quickly become inspired by the way it works, finding it perfect for recreating those evocative sounds from the 70s and early 80s, regardless of whether it’s basses, leads or wild effects.

There were several different Odyssey models, each with different filters. The first of these was a whiteface which is is often mistakenly described as having a Moog-type Filter. This isn’t true, the whiteface Odysseys contained a 2-Pole SEM type filter which gave a distinctly different sound to that of later models. The Oddity was modeled on our coveted MkII Black and Gold model 2813.