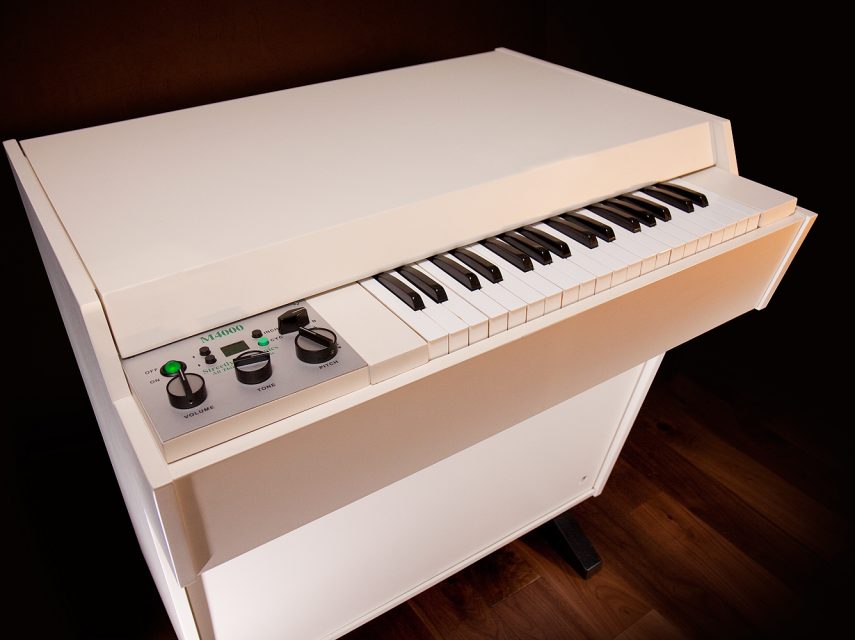 Our M-Tron was modelled on the legendary British instrument, the Mellotron®.

The original instrument was introduced in 1963, but faded into obscurity in the late 80’s and early 90’s. However, due to its evocative sound, it was later rediscovered and used by countless leading artists including Oasis, Radiohead and Kasabian.

Due to its evocative sound, it was rediscovered by artists including Oasis, Radiohead and Kasabian.

The principle of the Mellotron® was simple: take a 35-note keyboard and have a piece of tape for each note containing real recordings played by real musicians. This arguably made it the world’s first sampler.

The Beatles were big fans with recordings varying from single notes, as in the Flute sound on Strawberry Fields Forever to entire musical motifs as used on their Bungalow Bill track. (And you don’t get many better advocates than the original Fab Four.)

What made the sound so distinctive was that each note only lasted up to eight seconds before the musician had to release it and allow the tape to rewind. This forced the musician to adopt a different technique – popularly known as ‘a spider crawling up the keys’.

What made the sound so distinctive was that each note only lasted up to eight seconds. This forced the musician to adopt a different playing technique – popularly known as ‘a spider crawling up the keys’.

However, while the sound was undoubtedly magnificent, because of the huge array of moving parts, the instrument’s reliability was not quite so impressive.

Rick Wakeman tells us that, during the recording of David Bowie’s classic track Space Oddity, he had to struggle to keep the pitch of his Melly in tune. “The more notes you played, the more strain it put on the motor which then slowed down and changed the pitch of the notes. To keep the thing in tune during the session, I played chords with the right hand while constantly adjusting the pitch-knob with the left.”

Rick became so fed up with the instrument’s unreliability, he unceremoniously burned his at the end of a Yes tour.

Rick Wakeman became so fed up with the instrument’s unreliability, he unceremoniously burned his at the end of a Yes tour.

Purchasing an original M400 now would cost several thousand pounds and it would probably only come with the default three sounds, Cello, Flutes and Violins.

The M-Tron, our first emulation of this legendary instrument, cost a fraction of this price and came with over 2Gb of sounds that didn’t require you to dismantle the instrument to hear them.

The M-Tron captures all the character of the original instrument by sampling every note of every key and sticking to the eight second note limit. This ensures all the nostalgic magic is retained – minor imperfections and all.

Now, we’ve upped our game again with a further enhancement, the M-Tron Pro.

The 3.5GB sound library features nearly 200 tape banks of sample sets including those from the M-Tron. 19 tape banks were emastered at London’s Abbey Road Studios, resulting in a warmth of tone that even outdoes the originals.

Simply load these patches for instant nostalgia with a twist or open the lid to access the easy-editing controls for layers, splits, reverse, half-speed, envelopes, and the new tape ‘brake’ flywheel speed feature. This quirky feature pretty much takes us all the way back to the beginning of our story and the idiosyncrasies of the original Mellotron®.