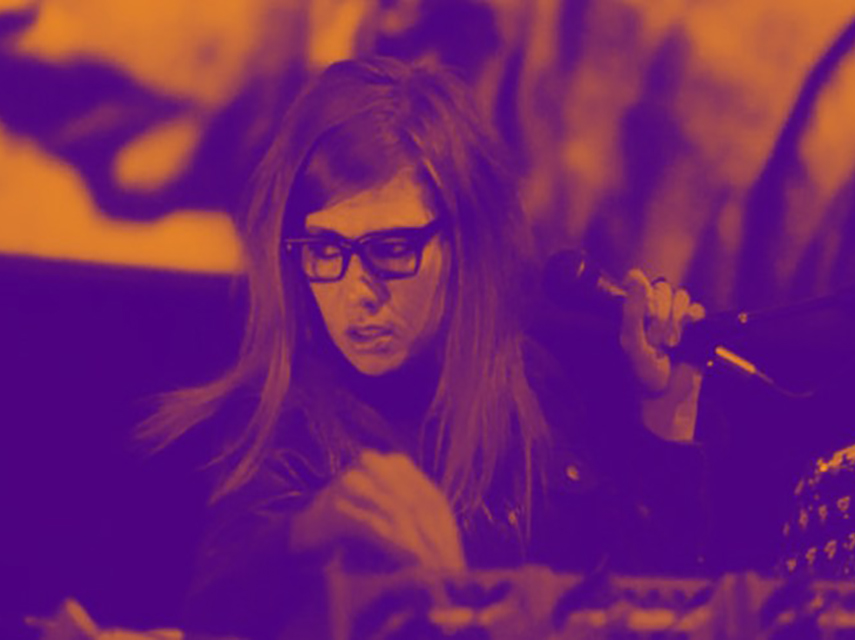 Tara Busch and I Speak Machine

Taking analogue synths on the road is never something to be done lightly and despite our love for them, it’s not something we’d ever recommend. However, it might just work out for a one-off event but only if the person using them is adept and understands that problems can happen at any time – that’s the nature of the beasts and we’ve seen many people lose the battle in a live situation when things start to go awry.

So when we voiced the idea of providing some of our analogue children to Tara Busch, for her and Maf Lewis’  I Speak Machine event in London, we did so with a mixture of chariness and excitement. Furthermore, when she eagerly accepted, we also understood that our responsibility didn’t end at simply loaning a few treasured antiques and hoping for the best. This was more a commitment to the cause and no doubt copious amounts of technical guidance would be required. In truth though we needn’t have worried because via Tara’s talent and tenacity, she immersed herself in each instrument, batting aside any obstacles and challenges with ease…..and on the night I Speak Machine truly excelled.

Tell us more about the I Speak Machine project.

I Speak Machine is an audio/visual collective consisting of myself and film maker Maf Lewis, and anyone else we decide to include on any given project. At it’s core, we create movies made specifically to be screened with a live score; these tend to be science fiction and horror as that’s our taste. We employ a process that we like to call “Synchronika” – which is, the film and the music are created simultaneously from a story, so that they influence each other directly and immediately – and so that neither the film or the music gets treated as an “afterthought”, as would the music to most movies, or the video to most music. We also are very keen collaborators, future projects involve collaborations with Benge Edwards, Clint Mansell, Gazelle Twin, John Foxx & Tommy Lee Edwards.

What were the instruments you opted for and why?

I used an ARP 2600, ARP Odyssey, OSCar, Sequential Circuits Pro One & Roland SH 101. I was aiming to get a very wide variety of synths tone-wise, and it also depended upon the ones that were available, of course….I wanted something that was narly & nasty ( the OSCar & Pro One) and a few that could make horrific noises where I didn’t necessarily need to worry about staying in tune…and of course speaking of that, I needed something more stable (the SH 101) . The OSCar was the only programmable one and seemed to me to be the most reliable. The SH 101 was the only naughty “band member” & was a bit drifty tune-wise. It’s funny, the one I expected to be the most unstable, the ARP 2600, was the most stable and the SH101 was the most unstable….but I learned how to harness that!

Faced with the learning curve of each instrument, what were the main obstacles you felt you needed to overcome?

The main thing was just feeling confident with being able to “surf through” whatever situation the synths may throw at me…and I had a month to learn my music & transfer it into the live format, and learn all about the synths. I spent a tremendous amount of time rehearsing with them and just learning how to play them – this certainly helps navigate any problems that might come up & builds confidence. In fairness, the synths were all in beautiful shape and didnt have any flaws, except for the SH 101. The SH 101 did have the notorious tuning issue that is associated with the power button – but I rehearsed with it so much that I was very well practiced at what to do if the tuning dipped – mash the power button a few times & keep a calm head! It was a wonderful experience though…well worth the challenge!

With everything being run with Ableton’s Live as the hub, what GForce Software instruments were used?

I used the G Force M Tron – MKII piano was used a lot and MKII flutes. They always provide a drop of sweetness in all the nastiness!

We understand you gave each of the instruments a role within your virtual band? What defined each one’s role?

Ha! Yes. I tend to “synthro-pomorphise” my instruments a lot! The OSCar was my bass player as she was most stable, stayed in tune the best, and was of course – programmable. The Pro One was my guitar player/fuzz-maker/ maker of filthy sounds – I duplicated a lot of the OSCar bass lines on the Pro One for extra meatiness! They sound great together. The ARP Odyssey and the ARP 2600 were both responsible for filling the “Brian Eno” trippy-frightning-atmospheric-droney-noisey role.

When I was messing around late one night, I fell upon a really lovely patch & I wound up doing a super-weird Beatles cover!

The ARP 2600 & I really bonded the most – When I was messing around late one night, I fell upon a really lovely patch & I wound up doing a super-weird Beatles cover! And decided I’d do it live, which is a bit insane – something I’d never have considered even 6 months ago. So it seems, the ARP 2600 & I had quite a “bond”. I wonder if he still thinks about me….(Just kidding… sort of).

In terms of the actual live performance, juggling these old relics with the Maf’s films, your live vocals and sequenced parts seemed effortless from an audience perspective, but were there any hairy moments you can recall?

With the gear, there really wasn’t – I wish I had better control of my nerves in the first 2 films as it affects my singing – but the machines performed beautifully. Again, I had rehearsed so much and encountered lots of hairy situations in practice, that I became quite adept at circumnavigating them if they were to arise – I was armed & ready! The SH 101 stayed in tune and I was able to patch the ARP 2600 from scratch live in front of an audience without fainting from nervousness…I was pretty happy with how it went. My nerves eventually calmed down for The Silence and I really enjoyed it. Once you’re onstage, you have to ride the waves, not fight them!

In terms of the overall event, it was an undoubted success from an audience perspective, but is is there anything you would have done differently?

First of all, thanks – I hope the audience enjoyed everything…I think everything felt right as far as the show, but I wish I’d have come back out after the show to talk to everyone; I usually do. This time, I went into the dressing room, poured a huge glass of wine and sat on the sofa staring at the floor for 20 minutes. It was so intense getting ready for the show and I think I just needed to decompress.

Any favourite moments of the day?

I really loved our support act, CUTS – audio/visual artist from Bristol on Invada Records. Anthony (CUTS) was amazing & it’s always so great to meet new artists that inspire you. I hope to do some collaborating with him soon!

The ARP 2600! I’m obsessed with it. Sometimes you just find “the one” that you mesh with and that was it

If you had the pick of one instrument out of that set-up to take home, what would it be and why?

The ARP 2600! I’m obsessed with it. Sometimes you just find “the one” that you mesh with and that was it….it feels like “my instrument” and I want to do more with it, like my Ticket to Ride cover that I did at the show. I’d love to perhaps use it as a centerpiece for the next score, maybe do I Speak Machine shows with just me, the ARP, & Maf’s films. But I have to get my mitts on one first!

Did the use of vintage hardware whet your appetite for similar challenges in future?

Definitely!! I never in a million years would have had the nerve to have a setup like this a year ago. I have Maf to thank for really pushing me in that respect, because I was pretty paranoid and unconfident at first – he insisted on the ARP 2600 whereas I was a bit squeamish at first – and now I’m obsessed with having one (not sure that’s the outcome he intended, but…). I usually perform with my Voyager and a few Moogerfoogers – all modern pieces – so this felt like I was out on the trapeze without a safety net…and the more I rehearsed & got to know the machines, the more I realized that I loved that feeling & that I was in control of the chaos to a certain extent – which was all down to really hard work & rehearsal. And I feel like it’s really built up my confidence to where I want to incorporate them more, whenever I can (though I’m not sure I’d do a long tour with a bunch of vintage machines!) So now, I am on the lookout for an ARP 2600 to add to my setup someday, somehow – and I’ll be using my Pro One as well. It has a much more interesting feel, and adds a lot of character & uniqueness to one’s setup.

What’s next for I Speak Machine?

Well, we just got back to LA a few days ago, so we’re still settling in & unpacking. We have the release of the soundtrack to The Silence on Lex Records on November 24th it’s on 12″ vinyl and digital download. The we’re are finishing our next film, Zombies 1985, it’s already shot and the score is mostly written (I’m collaborating on the score with Benge Edwards). We’ll be diving into an animated multimedia project which includes a feature film also called “I Speak Machine” with Tommy Lee Edwards, and we’re taking some tentative steps towards developing a really odd horror feature set here in Los Angeles called VHS/POV which plays with two timelines, one reversed, one each from the point of view of the main two characters. Hopefully we’ll be doing some October/ November shows in LA. Lots to come!