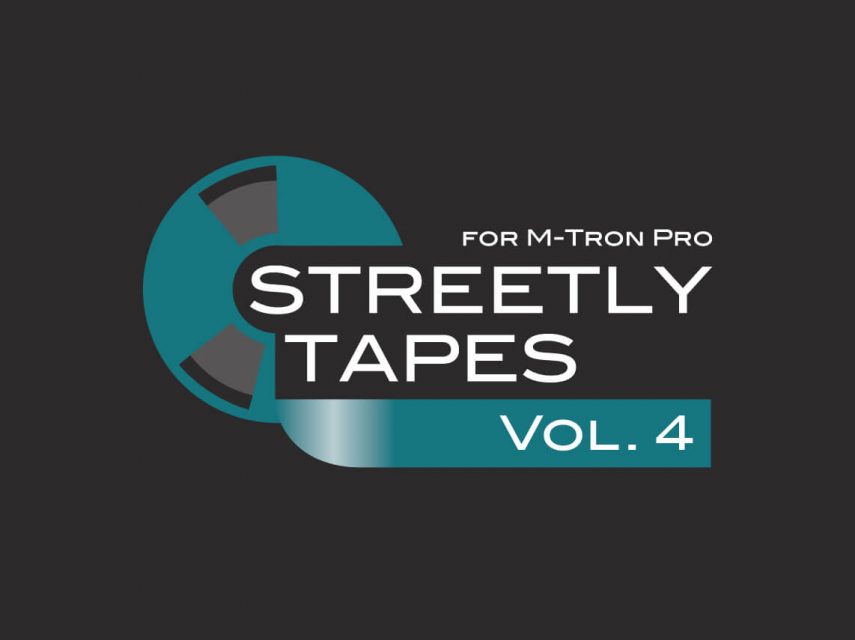 To be brutally honest, after The Streetly Tapes – Vol 3, we thought we’d exhausted the vast library of Streetly tape banks available. However, working under the tutelage of the original British Mellotron® manufacturers, Streetly Electronics to make these sounds available to M-Tron Pro users has been a huge voyage of discovery and an immense thrill, when Martin Smith called to say, “I’ve found some really rare tapes tucked away in the archives. Do you fancy a listen?”

The answer was a fast and unanimous “Yes!”

When this first listen took place our jaws dropped such was the range and quality of the sounds. Put simply, while we’ve lost count of the number of variations of the ‘MkII Three Violins’ tapes we’ve heard over the years, the ‘3 More Violins’ tape bank here has a sonic vibrancy and brilliance that sets it apart from the traditional MkII ‘Three Violins’, while still maintaining all of that etherial ‘Tron character. Likewise, the ‘Plain Cello’ sound may be based on the original ‘Cello’ tape bank so beloved by King Crimson and others, but here it has an energy and clarity that cuts and shines through. Similarly, the awesome ‘Octave Cello’, ‘M300B Lower Violin’, ‘Soft String Section 2’ etc etc.

One particular set of long forgotten recordings actually took our breath away. It was at this point we knew we had to compile then release this set of super rare sounds. Strangely, these alternative Sad Strings recordings were made at the same time as the originals, but had been locked away, unloved, unedited and unheard for decades. This is little short of criminal because the Sad Strings Chord Inversions are probably the most beautiful Tron strings we’ve ever heard. A set of chord inversions, largely based around the key of Ab, and played with “passionage” (according to the voice of conductor on the original tape recordings). This is where the happy accidents lie.

Even the dirtier recordings like ‘Moody Moog’ and ‘6 Wives Moog’ have a snarling character that’s musically and historically valid, casting us back to a time where musicians would record monophonic instruments and transplant these sounds into their Mellotrons in order to replay them polyphonically.

For many though, the highlights of this collection will be the Jack Bruce and Steve Hackett vocal tape banks. Jack’s vocals were recorded with automatic double-tracking (or artificial double-tracking) also known as ADT.

Steve Hackett’s The Voice Of Necam, from the 1978 album Please Don’t Touch, further reinforces the Mellotron’s use as the first sampler. NECAM was actually an acronym for Neve Computer Assisted Mixdown and was one of the world’s first automated mixing systems. ‘Necam’s Voices’ were recordings of Steve and others, which were fed into individual channels of a mixing desk, with NECAM used to control the movement of the channel faders. This effectively simulated a technique used by 10cc in their 1975 song I’m Not in Love .

And that’s the beauty of these tape banks – in line with the previous Streetly Tapes volumes, there’s a musical and historic relevance here in abundance, with almost every sound having an associated story.