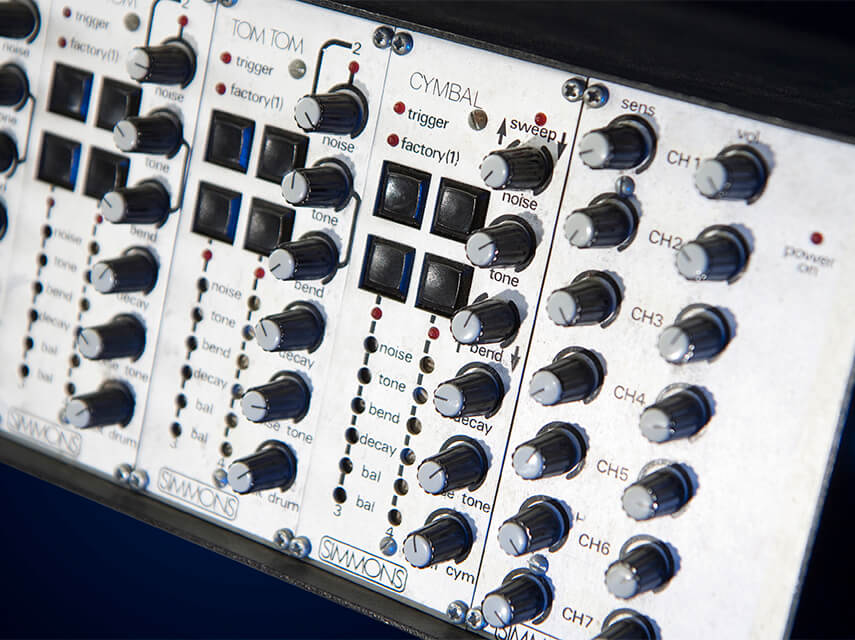 It’s not a synth but it is analogue and with the minimum of programming you can create sounds that will blow holes in walls.

The Simmons SDS-V was released in 1983 and took the drum world by storm with the ultra-stylised hexagonal pads, it looked cool and was a perfect fit, both sonically and cosmetically, with the synth-pop bands of that era.

As all fashion items do, it went out of vogue after a few years, largely due to the ‘peeewww, peeewww’ sounds that seemed to be compulsory during that era. Also it was superseded by the SDS-7, a digital/analogue hybrid and later the SDX, which came with the advertising slogan “The Acoustic Drum Is Dead”. As with all such claims, it was a prelude for bankruptcy but for a while Simmons Drums reigned supreme.

On tour we had two of them sitting side by side and these would be run in parallel ready to be hot-swapped as soon as the other one crashed. It was a regular occurrence and drove me nuts.

Chris and Dave have extensive experience with the SDX, both with the same high-profile user, Bill Bruford, and Chris comments.

“The SDX was an amazing bit of kit for the time. You had three sample zones per pad and for each zone you had three sample layers. Bill would take ages setting up each drum and things would start to sound really good when the main guts of the instrument (or ‘Brain’ as it was called back then) would crash.”

“Also, dynamically they weren’t that good in my opinion. They just seemed to operate on two levels – nothing and full-on. To me everything sounded like a bloody road-drill.”

Dave’s opinion is slightly less harsh but freely admits his time spent recording Bill at the SDX was in the relative luxury of a studio. However, he still prefers the SDS-V.

“I still have one and it’s a top bit of kit. With a fully loaded rack you’ve effectively got seven analogue synths or modules and you can tune each module to a specific note and each trigger via a MIDI/CV interface. I refuse to use it for drum sounds today, instead I’ll create the biggest sub-bass known to man. You set the bend to zero, the decay to max and then tune each module to a different LOW note. The range of the module is sufficient enough to hit the mythical ‘brown note’ and on more than one occasion I’ve totally destroyed any monitors that were connected.

However, I mainly love it because the lack of any real dynamic, compared to a real drum, really annoys Chris.”