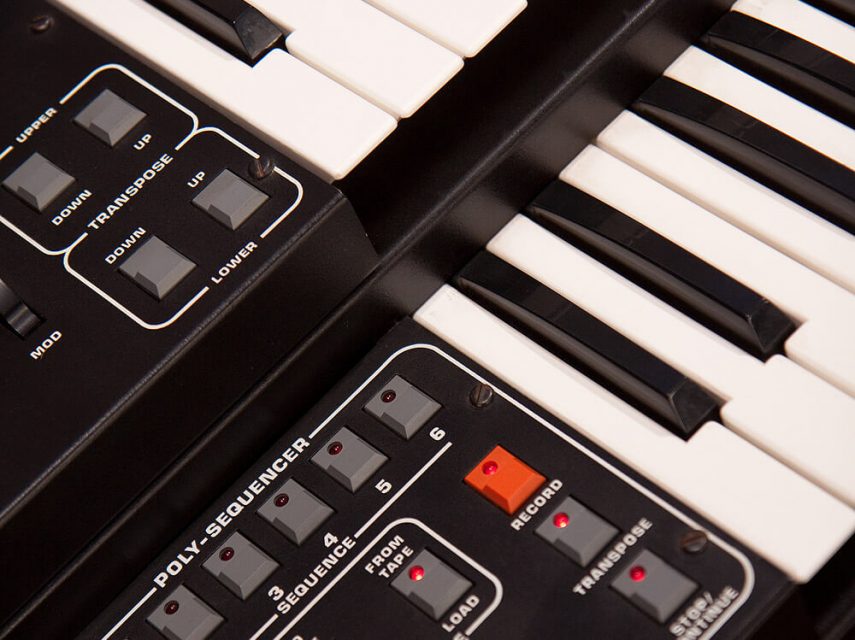 Rick Wakeman tells a story of being sat by a hotel swimming pool after a Yes tour, when he was approached by someone claiming to have plans and a schematic for a new instrument that the world had been waiting for. “A polyphonic Minimoog”

While it wasn’t an actual polyphonic Minimoog, given that’s what the synth world was clamouring for, Rick says that this wasn’t an uncommon thing to happen and he agreed to look over the plans and give his opinion.

“The flow of the instrument is wrong. Move that there and that there and it’ll be better. Also the name’s wrong – everything these days is to do with Swords and Sourcery. Hmmmm… The Seer, that’s a much better name. Tell me when you’ve built it.” Obviously, these weren’t Rick’s exact words but they probably weren’t too far off.

According to Rick he didn’t think any more about it, partly because everyone and his dog was cooking up some hair-brained idea for a new synth on a daily basis, but later he got a message announcing “I’ve built it.”

It had a single keyboard and promised 10 voice polyphony. However, it wasn’t called the Seer, it was called the Prophet 10 and while it looked and sounded amazing, it had a major issue. The heat generated by the sheer amount of analogue circuitry made the whole design unworkable. Legend has it that Patrick Gleeson bought two but they were complete disasters so less than ten of these were produced before partners Dave Smith and John Bowen stripped out half the guts from the case, lost half the polyphony, and in 1977 gave birth to a legend – the Sequential Circuits Prophet 5 Rev 1.

It lived up to expectations too. Thanks to the SSM based oscillators and filter it really did sound something like a polyphonic Minimoog. For the first time in history it was a polysynth with proper patch memories and it looked gorgeous.

The Prophet 5 story is very detailed and probably best told elsewhere. Because we own a raft of Sequential Circuits gear including the Pro One, Prophet 5 Rev 2, Prophet 5 Rev 3, Six Track, Multi-Track, Drum Tracks and Prophet 10, one day we’ll get around to a full-on feature. In the interim, we’ll just talk about the latter, flagship instrument, the giant dual manual, Prophet 10 Rev 3 that appeared in 1980.

Gone were the SSM chips, instead replaced by slightly tamer but more reliable CEM chips. And it was fundamentally two Prophet 5’s in a single case with two keyboards, a sequencer and a variety of triggering modes that include Alternate (where one note plays the Upper synth and the next note plays the Lower one and so on) and Unison, where a whopping 20 oscillators are assigned to a single note.

It also has a 10,200 event sequencer the contents of which can be stored onto a Braemer micro-cassette drive. It’s a fiddly process but it was a big step up from the previous Exatron wafer drives which could only store 2500 events and had a brilliant trick of destroying themselves when they jammed. However, when having ours MIDI retrofitted, we had to give up the sequencer, which in this day and age is no great loss.

It’s fair to say that in terms of commercial success the Prophet 10 didn’t set the world on fire, mainly because the Prophet 5 had already done that. The Prophet 10 may have been double the sonic potential of the Prophet 5 but in reality the 10’s giant footprint and weight compared to the 5’s more manageable and elegant proportions means that, for us at least, the 5 offers better bang for buck.

Testament to that early spirit of adventure

The estimated amount of Prophet 5’s produced was around 8000 and the figures for the Prophet 10 paled by comparison. This was probably because, at the time of release, the synth world had moved on. We now demanded velocity sensitivity, after-touch and more memories, but nonetheless the dual manual Prophet 10 is once again testament to that early spirit of adventure when bigger was better and bolder, and some synth manufacturers weren’t afraid to take equally big risks.

If you’re looking for a secondhand Prophet 10 for a collection you’ll be hard pushed to find one and should expect to pay anything between £4000 to £8000 depending on condition.

If you’re looking for a secondhand Prophet 10 to gig with, you need psychiatric help.