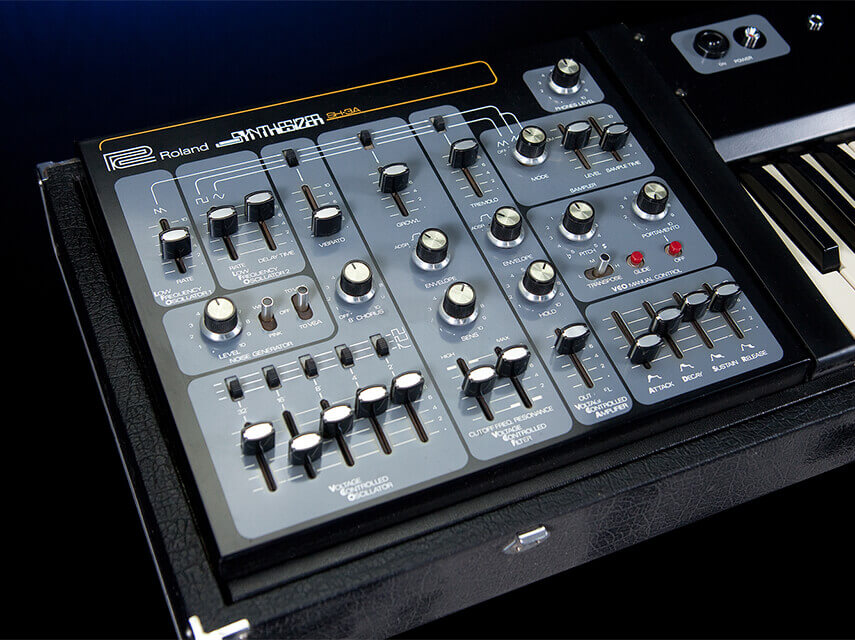 One of the first synths Dave here played was Roland’s SH-1000. It was hired in for a gig and after careful tuning and copious rehearsals where the best preset sounds were chosen, the day of the gig arrived and it was set up on top of a grand piano and tuned a couple of times for good measure.

Just before the gig though, someone in the audience who Dave refers to as an ex-friend walked up to it with screwdriver in hand and turned the tune pot on the back of the instrument in a completely arbitrary direction.

The result was that when Dave went on stage and started the first song, everything was horrendously out of tune. He never worked with that band again and was relieved when most of the band either moved abroad or died.

Launched in 1974, the SH-3 was Roland’s first non-preset synthesizer but rumour has it that there was an infringement on the patented Moog filter and so the instrument was duly altered becoming the SH-3A in around 1975. We’re not sure how true this is but it doesn’t change the fact that we have a soft spot for the SH-3A.

Why? Well because for what looks like a simple monosynth it has some interesting foibles including mixable oscillators ranging from 32’ to 2’ (each with a switchable waveform) and three LFOs. There’s a couple of other neat tricks the instrument has up its sleeve including Sample & Hold (in this case simply called Sample) a neat portamento ‘kill button’ which cancels the portamento setting until you play another note. it’s these kind of quirky functions that encapsulate that early synth engineer spirit of adventure and we love ‘em.

Don’t pay over the odds

If you’re lucky you’ll pick up a good condition SH-3A for a few hundred quid but if you see an SH3 going for serious amounts of money, complete with a story of how a similar one was sold for $12,000 at a Sotheby’s auction, be suspicious.

We saw that post on Sonicstate, as did many other people but Pete Forrest, the author of the brilliant A-Z of Analogue Synthesizers books, claims he can find no trace of this sale taking place and thinks it may have been a clever ruse to inflate the price of a secondhand SH-3.