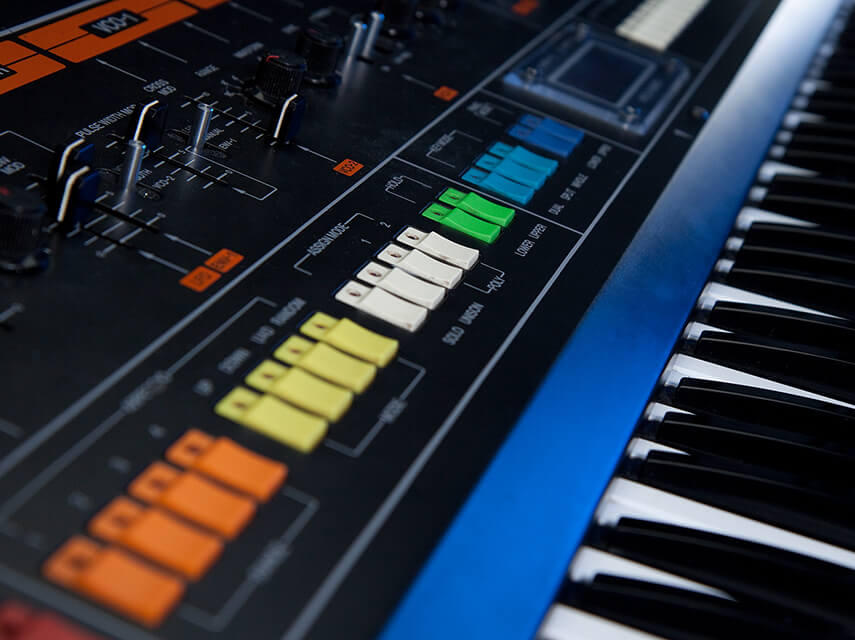 Released in 1981, the Roland Jupiter 8 was the analogue flagship polysynth from Japan that squared up to the US manufactured Prophet 5, Memorymoog and Oberheim OBXa polysynths.

Prior to the arrival of the JP-8 it was often mooted that Japanese synths had a thin sound in comparison to the US counterparts. Certainly, trying to compare the sound of a 1978 Jupiter 4 with that of a Prophet 5 Rev2 was going to prove this point but it’s worth bearing in mind that upon release, the JP-4 was $2995 while the P5 was around $4495.

‘We Design The Future’

The thing with the Jupiter 8 was it offered 8 note polyphony, it had patch and performance memories, it was styled to showcase Roland’s then marketing line of “We Design The Future”… and it was reliable. It also sounded great, not in a US kind of way but in a fresh, bright kind of way, thanks to it’s two VCOs, a lovely sounding 24dB or 12dB filter which wasn’t derived from CEM or SSM chips, and a very comprehensive feature set, including oscillator sync, cross modulation and an arpeggiator.

At a fraction under $5000 it certainly wasn’t cheap but it in our opinion it was THE synth that finally made the professionals sit up and take notice of Roland. Indeed most Japanese synth manufacturers. Before the Yamaha DX-7 came along and shifted the synth world on its axis.

There were two versions of the JP-8.

On early versions there’s no Digital Control Buss (or DCB) which was Rolands way of communicating with sequencers such as the MC4 and MC8. They also used 12-bit DACs but this was changed to 14-bit after serial 171700 to improve tuning stability – as a result while there are those out there who think that early versions sound fatter as a result, those of us who looked to companies like Roland BECAUSE they had oscillators that didn’t drift too much think that’s tosh.

It wasn’t perfect though.

Firstly, we’d love to have seen a 32ft stop on the VCOs. Secondly, we’d like to have seen a transpose up/down button. Thirdly, patch increment/ decrement buttons would have been great because once these switches start to go (and they do) you’ll find some patches can be elusive. Fourth, a unison voice detune would have been really nice, but that’s kinda nit-picking.

There’s no velocity sensitivity but strangely the JP8 still feels like an expressive instrument to play. The truth is whereas some vintage synths feel vintage to play, bizarrely the JP8 doesn’t. Notable owners include Howard Jones, Tears for Fears, Michael Jackson, Talk Talk, Tangerine Dream……and probably the reason we wanted one…..The Blue Nile.