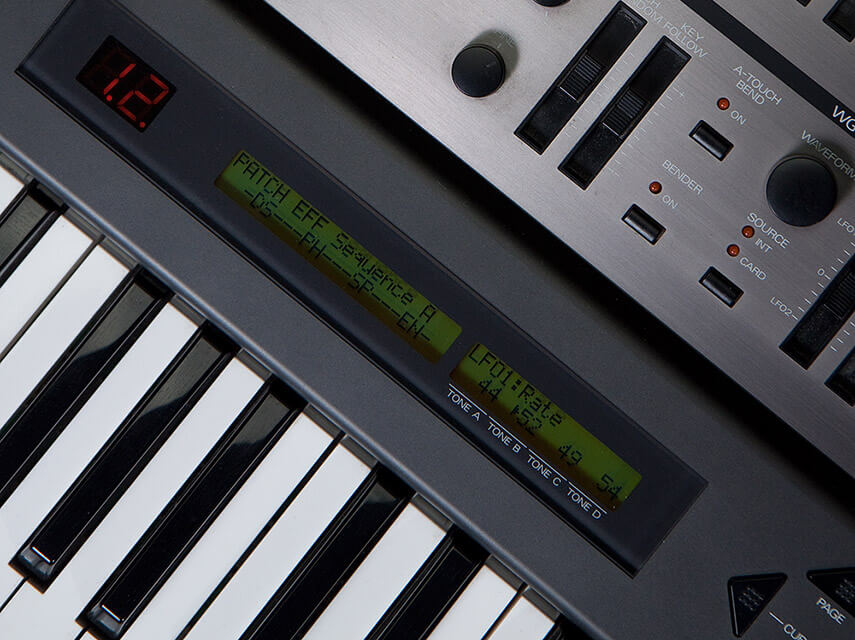 Okay it’s not analogue and there are some limitations such as no CC control over parameters or oscillator sync but we fell in love with this instrument when it was released and we were lucky enough to get hold of a review model.

We did whatever we could to keep it but when the inevitable day came when we had to wave goodbye to it, Dave went out and bought another one the next day.

The JD800 was released in 1991 at precisely the same time as the analogue revival was starting to take hold in the UK. With it’s 4 layers and multitude of sliders and real-time controls it should have been an instant hit. After all we’d been crying out for knobs and sliders to be put back on synths for years so it’s hard to see why it wasn’t as coveted as perhaps it should have been.

But strangely it wasn’t and at one point it was mooted by those in the know that the JD-800 had been a ‘major disappointment’ in terms of unit sales.

Perhaps that’s because the first thing anyone seemed to say in 1991 when faced with a synth was “What’s the piano sound like?” In the JD800s case the answer was “Bright” but to the more enlightened there was (and is) so much more to to the instrument than the piano sound.

The JD800 was released in 1991, as the analogue revival was starting to take hold in the UK.

In fact it was a bloody beauty. Finally we had dedicated, tactile and real-time control over our sounds. We had over 100 basic samples from which to use as a starting point to our own creations. We had lowpass, bandpass and highpass filters, multi-stage envelopes, Roland’s pristine effects and the ability to effectively layer four different synthesizers and create one awesome patch. Alternatively we could use it in multi-timbral mode.

Granted, the polyphony count wasn’t brilliant with a max 24 tone polyphony but like all world-class instruments, there is beauty in limitation because it forces you to look for creative way around this – like playing less notes for a start.

“I toured this with Debbie Harry soon after it came out and it was reliable and, sonically, covered nearly everything we needed. I do remember having to work closely with the Front Of House engineer because the bell sounds had a tendency to slice people’s heads off, but once we’d got the balance right the JD-800, a DX-7, an Akai Sampler and a Korg CX-3 gave us the palette of sounds necessary to recreate all the classic Blondie hits” Reveals Dave. Additionally, after the sluggish keyboard response of instruments like the D-50 and D-10, because the JD’s keyboard had a dedicated processor, it was brilliant to play.

The only drawbacks I found were the aforementioned lack of Oscillator Sync. which I believe the rack mount JD990 had. That you had to record control data as SYSEX which could make things sluggish on playback. And, in the studio, I could have done with a dedicated MIDI Local Off button. Other than that it’s one of the most under-rated instruments ever in my opinion.

In fact I still use mine as my main non-piano action master keyboard.”

If you want to pick up a JD800 now’s the time to do it while the price is still low. In the UK we’ve seen them sell for as little at £250. A total bargain.