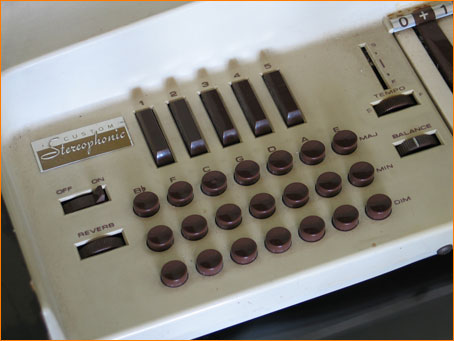 Here’s a brief story that may amuse you. When we launched the M-Tron we got an aggressive email from someone in the USA who’d bought it and decided to email us his thoughts.

We’d love to print the email in all its glory but the grammar was pretty shoddy so we’ll just print the best bit (we’ve tidied up the punctuation a bit too).

“I like the Beatles and bought this instrument for those sounds, not stupid cheezy rhythms. Tell me why you included these? They totally suck and I feel ripped off that I spent good money on sounds I’ll never use”.

Now we understand that ‘you can’t please all the people all the time’ but we felt the rhythms had a magic to them that was unsurpassed and they truly deserved to be included. Thankfully other users felt similarly and now it’s rare to turn on the TV without hearing these grooves appear somewhere – they just add such a great twist to what would otherwise be a fairly average soundtrack.

Love the grooves, hate the instrument

And that, ladies and gentlemen, is why we love the Optigan grooves so much. In fact I think I can safely say that we love the grooves but we hate the instrument. Why? Because it’s built so cheaply and is almost impossible to keep in tip top condition for any longer than 3 months. Seriously, if you thought analogue synths took some looking after, they’re nothing compared to the Optigan, if only because on an analogue synth most parts are still available.

The Optigan story is a fascinating one and is far better explained by Optigan devotee Pea Hicks at his insanely detailed site optigan.com. Nonetheless, here’s a brief version of events.

The giant Mattel corporation, makers of all things toy-like including Barbie, Hot Wheels etc. had been working on various kinds of audio playback devices and in the process had explored various associated technologies. Being the giant corporation that they are, this involved purchasing the Chamberlin patents as well as some other patents relating to photo-Electric-Organ technology.

Enter the Optigan, a keyboard instrument aimed at conquering the burgeoning home entertainment market and intended as an essential part of 70’s living.

We’d already had the home organ revolution so what did the Optigan provide that we hadn’t seen before? The answer was Long Playing Record sized celluloid disks that you could insert inside the instrument and, hey presto, instant accompaniment to the keyboard sound.

Playing along was made easier than ever before because the buttons that trigger the accompaniment were marked in three rows of Major, Minor & Diminshed and contained Bb, F, C, G, D, A & E keys. There were also some buttons and rocker switches for effects and, if you had the deluxe model, a reverb control.

There were forty discs available in a range of different styles and playing along with each was easy thanks to ‘easy to read’ charts which listed not only the right buttons to push but also, as each key was numbered, the correct note to play.

So what went wrong and how come the Optigan didn’t become a household name?

The real answer is “we’re not entirely sure” but it could have been a number of factors including (a) the sound quality was distinctly Lo-Fi and (b) The instruments themselves were built to a budget of what seemed like around $3.99 and as such their reliability was highly suspect. Or it could have been that very few people really cared about a cheesy home organ when this new-fangled synthesis stuff was starting to take hold?

Regardless, Mattel’s loss is our gain and just like the Melly rhythms, the Optigan grooves have a certain Lo-Fi magic about them that makes them so appealing in this day and age of digital cleanliness. In fact, so-much-so, we’ve now released our OptiTron Expansion Pack for M-Tron Pro which gives you heaps of these grooves as well as a smattering of lead sounds too.