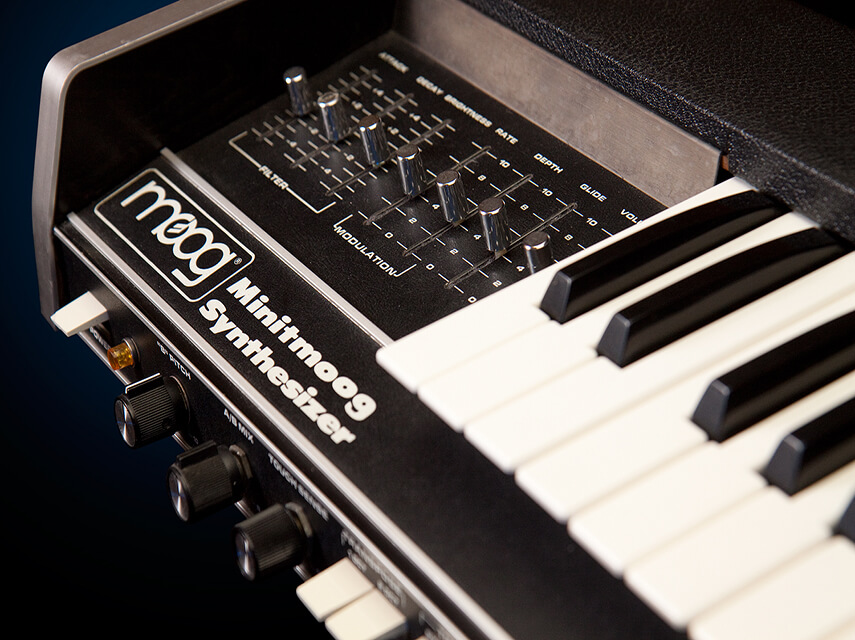 No you didn’t spot a typo, there really is an instrument called the Minitmoog.

While it was designed to appeal to the 70s ‘synth on top of an organ’ players, in the same way as the ARP Pro Soloist and Roland SH-1000 & 2000 preset synthesisers, the Minitmoog is way more exciting than Moog’s other offering in this category, the Satellite.

The Minitmoog is also stupidly rare, firstly because there were very few made. Secondly, and more significantly, because the build quality was a little lack lustre, not many have survived over the years. Therein lies an interesting history lesson:

Essentially, even with the success of the Moduar and the Minimoog, R A Moog inc never had a cash surplus so shortly after the Minimoog’s release, the company was sold to a new owner, Bill Waytena, who initially merged it with his own company, muSonics, to help sell his muSonics Sonic V synthesiser, before he realised that the Moog name was as synonymous with synthsesisers as Biro was to writing implements and changed the name of the company to Moog Music Inc.

He realised that the Moog name was as synonymous with synthsesisers as Biro was to writing implements.

This is the reason why you’ll see Minimoogs with R.A Moog Inc, muSonics and Moog Music badges on them. R.A Moog versions are insanely rare and collectible with only 100 being made, muSonics Minimoogs are probably just as rare but not quite as desirable as an R.A Moog version. Whereas the Moog Music Inc Minis are more ubiquitous.

Anyway, Minimoog history lesson aside, Watena did a deal with the Thomas Organ Company to manufacture a cheap preset and pay Moog a nice fat royalty. That synth was the Satellite

The Satellite had been devised by David Van Koevering after seeing the ARP Pro Soloist. Like it’s ARP rival, the Satellite was a preset machine with a single oscillator and while it was largely uninspiring it inflated the value of Moog to the point where Watena was able to show a big one-time profit and sell the company to Norlin. This sale marked the beginning of the end for Moog but just before Norlin folded, they decided to build a pro version of the Satellite, The Minitmoog.

Released in 1975, the Minitmoog is an altogether more inspiring instrument thanks to two oscillators, oscillator sync, aftertouch and a raft of presets that ranged from the obligatory Trumpet, Clarinet and Flute to the more exciting Taurus, Lunar and Aries.

Aftertouch allowed you to Sweep the filter, perform sync sweeps, pitch bends and vibrato. Plus, with a selection of control on both front panel and the left of the keyboard, you could detune VCO2 (or Oscillator B as it’s called) and alter parameters such as brightness, attack and decay times, portamento rate and modulation speed and depth.

We love it in the same way that we love the ARP Pro Soloist & DGX in that it’s a straightforward but great sounding instrument with few frills but in the right hands will impart a fair amount of expressivity. Granted the build quality isn’t up there with the SH-1000 or the Pro-DGX but if you look after it and only bring it out on special occasions you’ll find that it has a certain magic about it that neither the Roland or the ARP rivals have.