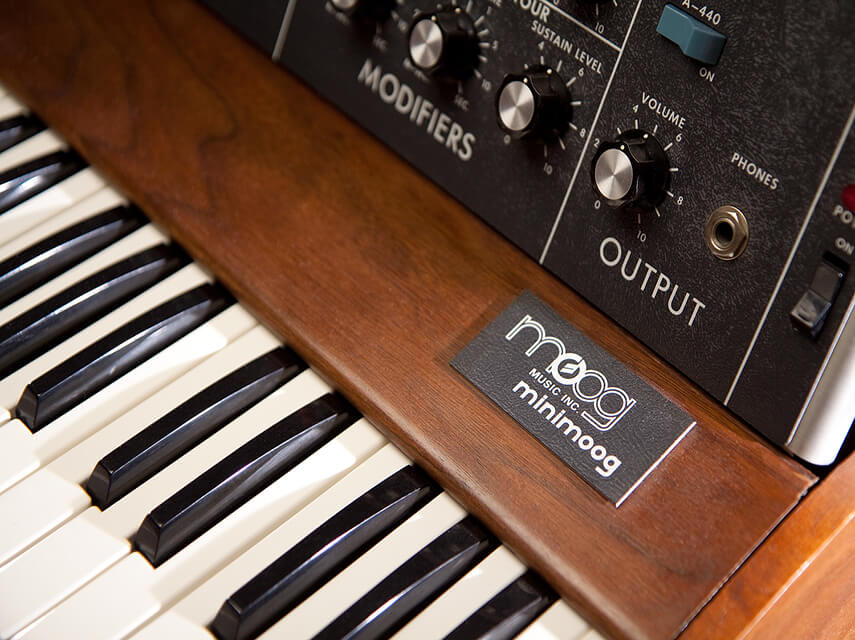 The Moog modular has always been the holy grail of analogue synthesisers for anyone old enough to remember the sonic palette of Wendy Carlos, Keith Emerson and Tomita, to name but a few.

But after Bob Moog’s initial success with these giant beasts there was a period where they were considered either a sound effects machine or a bit of a novelty.

What the world really wanted was a more portable solution and while the Brits from EMS had already shown what was possible with the VCS3 in 1969, in 1970 R. A. Moog Inc released an instrument that changed everything. The Minimoog Model D.

Whereas previously you needed to know what module to patch where, in order to create a sound with a modular synth, the Minimoog’s intuitive layout defined every instrument that came thereafter because it’s workflow was so elegant and easy to grasp. No patch chords were necessary either.

On top of this, largely thanks to some mathematical errors, it has a sound that is unique and in our opinion, probably unsurpassed. The theory that the Minimoog is simply a cut-down Moog Modular is shattered when you place them side by side and use your ears. To quote Will Gregory in the Bright Sparks documentary “The Minimoog has a sound that jumps out of the speakers, sits in the room and growls at you.” And if we’re honest, we’ve often been caught out having created what we think is a powerful sounding patch on something like an Oberheim 8 Voice, using all 16 VCOs and then compared it to a single oscillator Minimoog sound. The Minimoog’s power is jaw-dropping and and believe us when we say that we’ve put it next to almost every other oscillator out there. Even our Moog modular doesn’t have quite the same raw punch.

We love the Minimoog so much that initially we had no plans to pay tribute to it with an emulation. However, after finding other emulations left us feeling cold we developed Minimonsta in an attempt to combine the original’s brilliant simplicity with extra, more modern and ‘esoteric’ features such as patch morphing and the ability to apply an additional LFO to almost any of the instrument’s main parameters.

If you want to learn more about the development of this truly iconic instrument, please check out the words of Herb Deutsch, Daniel Miller, Will Gregory and Bob Moog’s daughter, Michelle Moog-Koussa, in the Bright Sparks documentary.