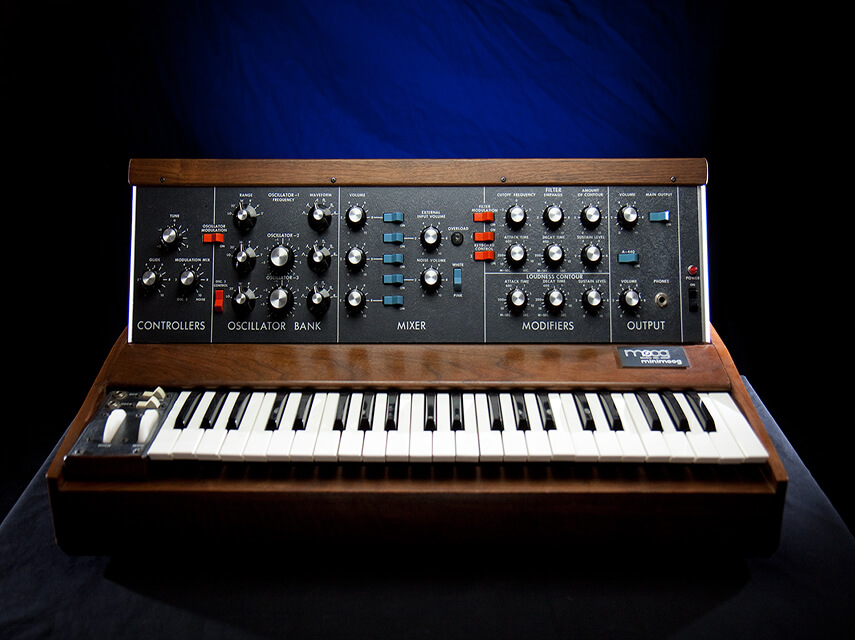 Despite the fact that Bob didn’t invent synthesis itself or even release the first portable synthesizer, it’s fair to say that his instruments changed the face of electronic music forever and introduced a noun into the worldwide musical consciousness – The Moog.

Even the great unwashed couldn’t fail to escape this association as the name Moog® became to Synthesisers as Hoover is to Vacuum Cleaners.

It’s not hard to understand why either – forget the fact that post Switched On Bach there was a glut of Moog novelty records – from a musician’s perspective there’s just something inherently musical about nearly all of Bob’s babies. Even the big old modular beasts.

The Minimoog® reinforced this musicality from the off, not only was the sound a significant step away from its Laboratory roots, the layout was so intuitive that it defined the flow of almost every successive synth for years.

However, it was undoubtedly the Minimoog® that reinforced this musicality from the off, as not only was the sound a significant step away from its Laboratory roots, the layout was so intuitive that it defined the flow of almost every successive synth for years and just begged to be tweaked. Indeed, ARP may have been rival manufacturers but Alan R Pearlman’s designs belied his past as an engineer making Op Amps for the Gemini Space Program whereas Bob’s babies revealed a sorely needed marriage between engineer and musician.

As a brief aside, Bob chose to attend the Bronx High School Of Science despite the fact that his teachers had recognised he had the talent to become a professional pianist. And it was here that he chose his project of building a Theremin.

The Minimoog was almost the instrument that never was though and the story goes that Bob was very much in demand on the talk circuit and on one of his regular trips left Moog HQ with implicit instructions that, due to the expense, no one should manufacture any printed circuit-boards for ten Model C prototypes that the team were working on. However, someone in the office decided to ignore that order and build the instruments using PCBs. On his return it’s alleged that Bob was furious but as no one would outright own up to the misdemeanor, rather than fire the entire staff, the first run of Model D Minimoogs were completed. The rest, as they say, is history.

The Minimoog is unarguably one of electronic musics most important instruments and many argue that it was as vital to electronic music as the guitar was to rock and roll.

The Minimoog is unarguably one of electronic musics most important instruments and many argue that it was as vital to electronic music as the guitar was to rock and roll. With approximately 13,000 units made over its lifespan, it’s almost easier to work out who didn’t play it, as opposed to who did.

However, like all early analogues, it wasn’t without problems and in the early days while things like tuning instability was well-documented, there were also other irritations such as early versions being plagued by radio interference. Rick Wakeman tells a wonderful story of Bob himself lining his with tin-foil during the interval of a Yes gig to stop the thing picking up radio signals from the local BBC transmitter.

As irritating as it was at the time, most of these early problems were ironed out with things like updated oscillator boards and improved shielding making the instrument one of the most loved electronic instruments ever.

Software, still offers limitations but it allows us to realise some things that are simply not possible with hardware.

We decided to model ours for a variety of reasons, not least because it’s a very early version and while it sounds magnificent, it does have a tendency to go out of tune at the drop of a hat. The calibration leaves a bit to be desired too so the idea of turning it into software became very appealing – provided that we took it to a new place and not simply churned out another Mini emulation.

Meeting Bob for the first time in the early 90s, he talked about a collective consciousness that was evident in those early days. Days where despite a lack of global communication, Bob, Don Buchla and Alan Pearlman would strive for something new within the set of technical (and geographical) boundaries that restricted them during that period.

Software, still offers limitations but it allows us to realise some things that are simply not possible with hardware and so we set about trying to fuse old glories with new a consciousness to come up with a new slant on an old friend.

The result is the ability to add extra LFOs and ADSRs to almost any Mini parameter as well as the radical Melohman patch morphing concept. Hopefully allowing users to take the past to a new place and use their imagination………..or should that be IMOOGINATION?