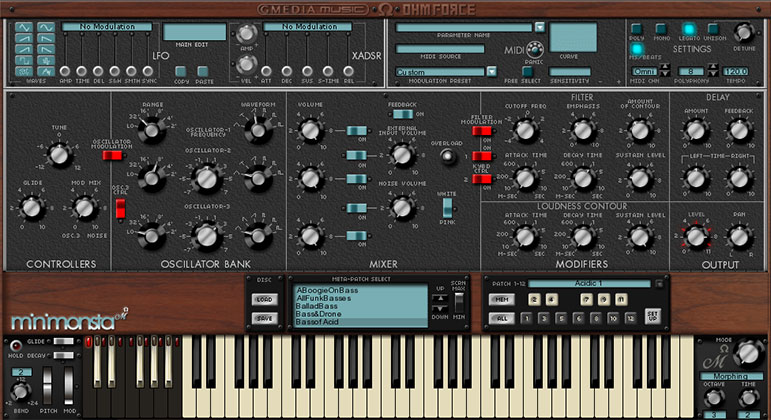 The original Minimoog® was manufactured between 1971 and 1982 and was an instant classic thanks to its musician friendly logical layout, tactile front panel, warm oscillators and powerful 24dB lowpass filter. In its time 13,000 were sold but if you want one now be prepared to pay handsomely.

Firstly, on the Mini level you have all the features and sounds of the Model D including accurate waveforms, a painstakingly accurate resonant filter, snappy ADS envelope generators and the wonderful Mini loop-feedback function. Using just these parameters, the Minimonsta has a huge tonal range from fat to fierce and from searing to sharp sizzles.

However, there is also another dark side to the beast, and it’s here where you can unleash a full-on Monsta.

In short, think of the Minimonsta as a modular Mini but without all the clutter of patch cords.

Instead of being shackled to a single LFO as per the original instrument, it’s possible to assign an LFO to almost any original Mini parameter including filter cutoff, resonance, individual oscillator volumes, even each envelope parameter. What’s more, each LFO has several waveforms, sync, and delay options from which to choose.

Additionally, for every parameter to which you can apply an LFO, it’s also possible to apply an extra ADSR.

Finally, there’s also the ability to assign MIDI modulation to any original Mini parameter and create effects such as dynamic glide times or velocity response to filter (both positive and negative). Put simply, the scope for sound design and sonic creativity is limitless.

And if the above isn’t enough, you can also dynamically morph between twelve patches within a Meta-Patch thanks to the unique Melohman octave. This takes a static software instrument and adds serious performance and dynamic real-time control possibilities – a boon to those real players out there who want to add life into their performances while remaining in constant contact with the keyboard.

With the extra LFOs, ADSRs, hugely versatile dynamic MIDI control and the Melohman octave you’ll soon realize while there are many Mini clones out there, there is only one true Monsta!

One of the user secrets on the original instrument was the loop feedback trick whereby you could take the output of the Mini and feed it back into the instrument’s external input. The resulting signal would then be output and could be adjusted to give anything from a heavier bass sound to extreme distortion. Many users loved it because of its unpredictability and this is faithfully recreated on the Minimonsta.