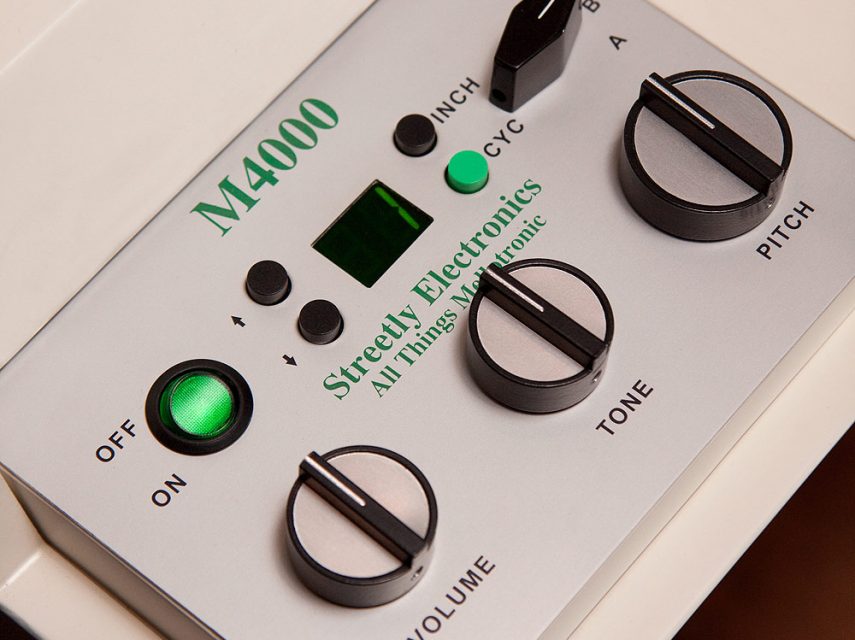 We’ve already said that we no longer own an original Mellotron® because we got tired of the constant maintenance. However, that’s not to say we won’t change our mind anytime soon because, in terms of musical heritage, the debt owed to the original sound is beyond reproach.

The magnificent M4000 from Streetly Electronics with its 24 sounds, might just be enough to persuade us to clear enough space in our studio again.

Fransen, the Bradmatic brothers and Eric Robinson joined forces to create Mellotronics Ltd and the Mellotron Mark 1 was born…

This is because, like the evolution of M-Tron to M-Tron Pro, the evolution from the original MkI to the M4000 is very evident, albeit with the path of the hardware being considerably longer and (even though we say it ourselves) more interesting. The following text has been adapted from Gordon Reid’s wonderfully informative Mellotron history that’s included in the M-Tron Pro manual.

The journey starts with Harry Chamberlin who created the Chamberlin MusicMaster which used the principle of playing pre-recorded tapes for each key. Sadly though, the instrument proved to be very temperamental and this caused the then salesman, Bill Fransen to look to a UK company named Bradmatic for potential solutions.

Fransen, the Bradmatic brothers and band-leader Eric Robinson joined forces to create Mellotronics Ltd and the Mellotron Mark 1 was born in 1963 costing a whopping £1000 at the time.

Again, due to reliability problems the Mark 2 appeared a year later and this time the whole concept took off with the instrument being embraced by The Beatles, The Rolling Stones and The Moody Blues. ‘Strawberry Fields Forever’ is probably the most famous Melly performance of all time and testament to the enduring sound of this magnificent instrument.

It was a total beast though, weighing 350lb and it wasn’t exactly road-worthy either. So in 1968 a smaller and cheaper instrument appeared, the Model 300. This was embraced by bands including Gentle Giant and Barclay James Harvest but, again, certain reliability problems reared their heads and the Model 400 superseded this a couple of years later. The M400 was the right product at the right time and was soon adopted in droves by the prog-rock fraternity. The sounds were undeniably as awesome as ever but there were still reliability issues. These may have largely attributable to the rigors and demands of touring but nonetheless it prompted Rick Wakeman to unceremoniously burn his at the end of one particular tour.

In fact, aware of Rick’s love of the sound but loathing of the Melly reliability, Dave Biro approached him with the idea of an instrument based around 8-track tapes. Rick invested heavily and the Birotron® was born as a lighter alternative that didn’t contain the eight-second note limitation. Rumour has it that there were between 30 and 50 produced, but, again, technical problems and the dawning of the polysynth era forced the company to fold in 1979.

The M400 was the right product at the right time and was soon adopted in droves by the prog-rock fraternity.

The new age of polysynths and string machines seemed to spell the end for the entire Tron genre and although the final Mellotron, the double manual Mark V, appeared in 1975, even high profile users like John Paul Jones couldn’t stop Mellotronics from being liquidated a couple of years later.

Fortunately, Streetly Electronics survived and although the Mellotron name could no longer be used by them, their Novatron appeared in the guise of four models.

As an aside, one of these models, the T550, was the model that the original M-Tron flightcase box was based on.

Nonetheless, technology marches on and with the advent of affordable digital samplers, it looked like the days of the Tron were finally over when Streetly Electronics went into voluntary liquidation in 1986.

This should have effectively been the end of the story and it’s fair to say that between the late 80s and 90s interest in the instrument was usually reserved for the dedicated few and those existing users needing spares for their own instruments. That is until we released the original M-Tron.

Almost immediately, interest in the original instruments boomed and, aside from being inundated with requests for more sounds, some of the more wealthy M-Tron users decided that an original hardware version would be a good investment. Indeed, Streetly Electronics, who had been servicing and refurbishing existing Mellotrons for some time, realized there weren’t enough old instruments in existence to satisfy demand and so it was only a matter of time before the old beasts resurfaced again in a new guise.

Today this Darwinian evolution has resulted in two hardware tape-playing Mellotrons being manufactured. The owner of the Mellotron name, David Keen, along with Marcus Reich, manufacture and sell the Mellotron Mk VI, while Streetly Electronics make what we consider to be the finest true Melly outside the MkII, the M4000.