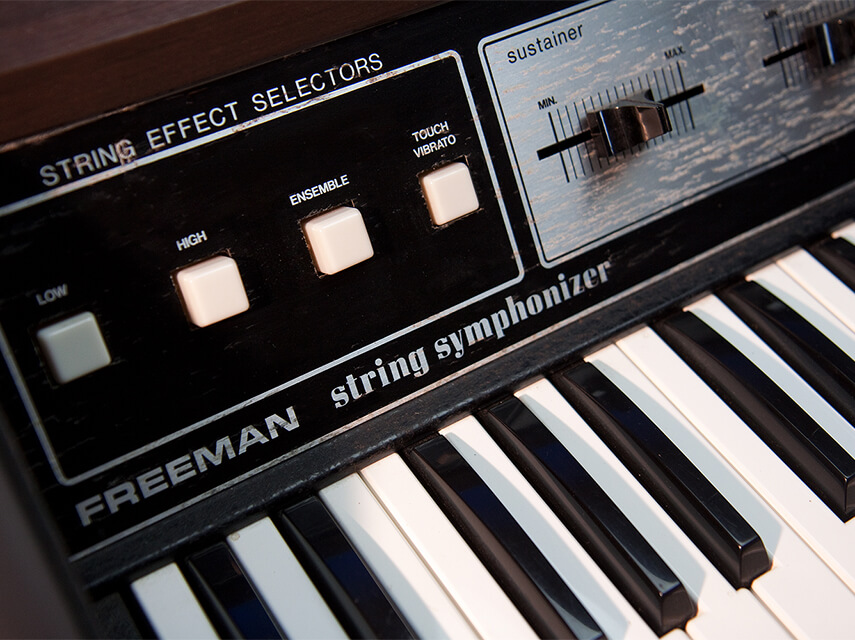 Owners of VSM will know that we absolutely adore the Freeman String Symphonizer and believe that inventor, Ken Freeman, deserves a knighthood for his services to music.

Why? Because the modern, polyphonic string synthesizer was invented by Ken way back in 1970 after he discovered that if you layered a note with another detuned and slightly modulated version of itself, a pleasant ‘chorused’ sound resulted.

Initial experiments were conducted with a Clavioline played through a Copycat tape delay where Ken found that by holding a single note on the Clavioline and using the knee control to swell the sound. When the resultant sounds was processed via the three heads of the tape delay, the modulated and out-of-phase result sounded somewhat similar to small ensemble of string players.

From here Ken decided that the only way to turn his dream of a chord-playing instrument into reality was to teach himself about electronics which eventually lead to the first prototype String Synthesizer – a somewhat Heath-Robinson affair with 12 cheap and unstable oscillators and 12 basic LFOs.

Spurred on by this initial prototype, he continued beavering away and another contraption followed, the legendary Prototype 2, comprising of three de-tunable oscillators and divide-down circuitry. Ken finally had something that sounded close to what he’d imaged and after exhibiting it at a Music Instruments Fair he garnered some interest from a company who helped him build the third, more cost-effective prototype. This was a cut-down version of the second prototype but despite lots of talk with several manufacturers of a commercial version being produced, nothing was forthcoming until US company Lowery came along.

A musician first and foremost

As an aside, Ken was first and foremost a musician and had originally conceived his idea not as a commercial venture but as a way of giving him access to sounds he’d heard on records when growing up. As a session musician of considerable note Ken used Prototype 2 on may hits including David Essex’s Gonna Make You A Star (a track which Chris and Dave listened to as kids and until a recent conversation with Ken we had no idea what the instrument he used for the lead sound), Jeff Wayne’s War Of The World’s and many more.

Ken originally conceived his idea as a way of giving him access to sounds he’d heard on records when growing up.

Lowrey put into production a variation of the third prototype under than name of the Freeman String Symphonizer and as much as we think it’s a unique and lovely sounding instrument, according to Ken it isn’t as lush as either the Prototypes 2 or 3.

Of course, while Ken was beavering away trying to turn his dream into reality Dutch company Eminent stormed in and are now credited as producing the first commercially available String Ensemble. And while there’s no denying it’s a fantastic sounding instrument, there’s also little doubt that Ken’s vision, hard-graft and initial prototypes contributed immeasurably to electronic music over the next few decades. Just look at the sheer amount of string ensembles that were subsequently released!

A dream and vision which spawned an entire genre of instruments

Ken may have a totally different view but, from our perspective, we don’t think he was given the praise he rightly deserves. His dream and vision spawned an entire genre of instruments and we were pleased to be able to film an interview with him for the Bright Sparks documentary, something that was a real honour.

Ken continued to work as a musician and composer and is credited with BBC programs including Holby City, Tripods & Casualty. He also worked with Gaetan Shurer on recreating all the original patches from Jeff Wayne’s War Of The Worlds 1976 album to take for the subsequent annual sell-out tours. Interestingly, two GForce instruments were used to recreate those original sounds – Oddity for Ken’s original Odyssey sounds. And VSM for the string machine parts.

In 2014 we were fortunate enough to film Ken talking about his instrument for the Bright Sparks documentary. This section is fascinating in that it reveals how the idea took shape, how it impacted on his career as a musician and who, in his opinion, ‘nicked it’.