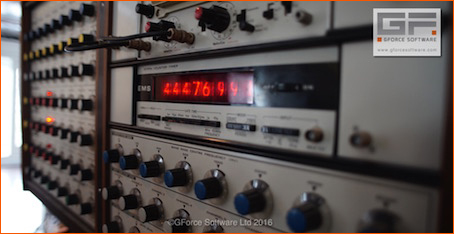 Looking at our list of fave gear it’s heartening to see at least one instrument and company from the UK.

It’s even more heartening when you consider that while many other classic brands such as ARP and Oberheim are historic trademarks under new ownership, Electronic Music Studios are still in business under the stewardship of an original EMS worker, Robin Wood.

Anyone who has listened to any of the BBC Radiophonic Workshop’s output will have undoubtedly have heard the Synthi 100. However, while urban legend has it that the Dr Who theme tune contains sounds generated by the Synthi, it seems unlikely. The theme tune was created before the instrument was released and it’s likely the only real link between the program and the instrument is that it was used for incidental music in some episodes. It was however used extensively on the BBC series The Hitchhiker’s Guide To The Galaxy.

You won’t find too many users of this monster because there were very few Synthi 100’s made but Jack Dangers used it extensively on the Meat Beat Manifesto album R.U.O.K? Also Karlheinz Stockhausen also used it on ‘Sirius’ and ‘Zodiac’. Mute supremo, Daniel Miller showed us his and talked lovingly about it while we were filming the Bright Sparks documentary too.

Think of the Synthi 100 as several VCS3 systems you’ll be halfway close to understanding it.

Think of the Synthi 100 as several VCS3 systems you’ll be halfway close to understanding it. It offered 12 Voltage Controlled Oscillators, 4 Lowpass filters, 4 Highpass filters, a three-track monophonic 256 Step Sequencer, a dual-manual keyboard each capable of being played duophonically, a 64 x 64 pin patchbay used to make the connection between the various modules. A Spring Reverb, limiters, envelopes and more. However, unlike the VCS3 which has the claim to fame as being the world’s first portable synthesiser, the Synthi 100 was anything but.

At nearly two meters long, it was more a piece of experimental, laboratory kit, than a playable musical tool. Sure, it excelled at sound effects, complex textures and all manner of bleeps and beeps, but it’s not an instrument you’re going to turn on and start playing solos and baselines with.

So why do we love it?

Firstly, because we’re huge fans of Peter Zinovieff and David Cockerell. We believe David to be one of the most successful and prolific designers ever and British national treasure. Indeed, both are paid tribute to in the Bright Sparks documentary, where Peter Zinovieff tells the EMS story as well as a great anecdote involving the Synthi 100, a French bar and a large quantity of cash.

Secondly, it’s the realisation of grand and extravagant ideas that reinforced that great concept of British eccentricity.

Thirdly, in the mid 90’s at the opening to the Museum Of Synthesizer Technology one task Dave had was to run ahead of the cameraman and make sure all the instruments being filmed had a half-decent sound coming out of them. There were people like Rick Smith from Underworld talking about the ARP 2600 and setting up a basic sound, which Rick could then use as a springboard while talking to camera was easy. But Dave admits to spending at least an hour trying to get the Synthi 100 to make a halfway decent noise and in the end he had to give up and admit defeat. “It’s the first and last time a synth has ever got the better of me.”

It’s like being immediately transported back in time to the days of Raymond Scott’s fantastic contraptions.

“Thankfully the person we were filming, Matthias Becker, didn’t fare too much better, otherwise I’d have topped myself” Admits Dave, half-joking.

“It takes time to get up and running with the beast but when you hear it being used by someone who really knows what they’re doing it’s like being immediately transported back in time to the days of Raymond Scott’s fantastic contraptions. When the future was bright, atomic and all the cool stuff would take place in space.”

Chris adds “I love the 60s honeycomb-style displays which scream vintage sci-fi and also that it’s got its own oscilloscope. The sequencer display that shows the remaining memory is simply a pointer on a curved readout – brilliant. Everything about this synth says British and experimental with a capital M.”