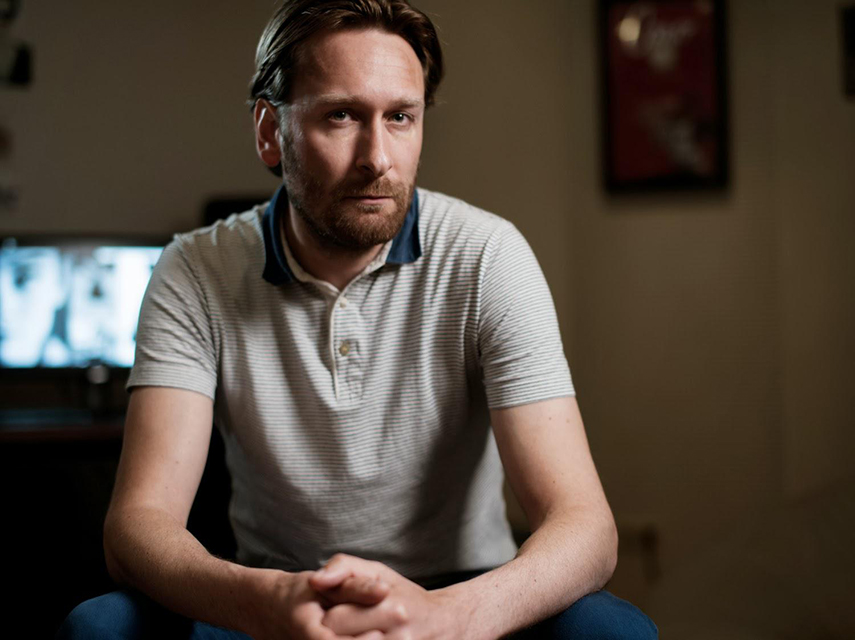 David Schreurs: Behind the scenes of the cutting room floor

David Schreur’s work came to our attention after hearing Caro Emerald’s wonderful “Back it Up” on the radio. After buying the album “Deleted Scenes from the Cutting Room Floor” we were delighted to hear extensive use of M-Tron and immediately recognised the craftsmanship involved in it’s writing and production. We love it!

Tell us about your path into the music business.

I’ve always been fascinated with music and sound. I started playing the piano and ‘writing’ my own stuff at a very early age. My older brother had a band, which seemed extremely exciting to me. I wasn’t particularly interested in being a great instrumentalist, so I did a little bit of everything: playing piano, drums, saxophone, writing, recording on an old tape-deck, playing in all kinds of bands. I remember I was always convinced I’d have a career in music. However, when I was 19 I went to law school (I figured some legal knowledge wouldn’t hurt). A few years later I bought a PC with Cubase and started producing tracks. After I graduated, I pursued my wish to become a songwriter and record producer, and worked my way into the pro scene after about 5-6 years. After scoring some local credits, I met Vince Degiorgio in 2006, and soon after we wrote “Back It Up”. This song kick started my most successful project to date: Caro Emerald.

Who were your early musical influences?

We don’t have to care about anything but our own opinion. Highly recommended!

Grandmono is a production company with management, a record label, publishing and merchandising around the Caro Emerald project as spin off activities. The initial plan for me and Jan van Wieringen (co producer/engineer of the album) was to setup a production company like (say) Cheiron or Murlyn: a house with a few crazy people making noise (with hit potential) all day. But when we couldn’t find a proper record label for Caro, I used my legal background to setup a business structure myself. We released “Back It Up” on Grandmono Records and soon discovered we didn’t need anyone else’s help, money or network. We liked our own ideas a lot better. It all started out very DIY, but we’ve learned a lot. It’s a bit of a company by now, but if you know what you are doing, it’s great to have everything in house. It enables us to do things that usually strand in between meetings and opinions. We don’t have to care about anything but our own opinion. Highly recommended!

How did you come to work with Caro Emerald?

In 2007, Jan, Vincent and I needed a demo singer for “Back It Up”. Caroline was a regular session singer for Jan, and her voice fitted the song perfectly. We loved her first takes and I really loved her classic, Billie Holiday-like beauty. But at the time, none of us looked at her as the artist. We pitched the song to several publishers and labels, without effect. A year later, Caro performed the song on a local TV show with instant effect, and that’s when we I decided to record a full album.

Did you start work on the album with a musical style in mind or did it develop as writing took place?

“Back It Up” was the model track for this project, so we had something of a direction. We did try a few other things early on, but soon focused on a mix of jazz / exotica and firm beats regardless trends and commercial goals. We created rough backing tracks for “Just One Dance”, “Riviera Life”, “That Man”, “Absolutely Me”, “The Lipstick On His Collar”, “Dr Wanna Do” and “The Other Woman”, and in November 2008 Vince and I started writing at his home in Toronto.

That week, we defined a big chunk of the Caro Emerald universe. We also realised we had something special on our hands: a great writing team, a great artist, a great sound, and a great production team. And great people too, if I may add. Of course, the style evolved as we went along, but the direction was defined during that week and we were very keen on sticking to that. Vince has an extensive background in A&R, which really helped us a great deal.

When Vince came over to Amsterdam in January 2009 to write some more, I stuck to our ‘own’ Caro Emerald style while producing the backing tracks for “I Know That He’s Mine”, “You Don’t Love Me” and “Stuck”. In August 2009, at the very last minute, Vince and I wrote “A Night Like This“ — also very much based on the direction we had created ourselves. I believe the strong focus on the songs and a unique and consistent sound played an important role in this project.

Were the songs on the album written specifically for Caro?

From backing tracks to melodies and lyrics, we wrote with Caro’s great voice as an inspiration, and also her strong appearance and 50s movie star looks in mind. Vince knows a lot of old movies, and we used images, movies and movie stars from the 40s-50s as a source of inspiration. This way, we started defining the musical identity of the Caro Emerald universe, and also the image and looks of it.

Writing was easy, we never needed to edit ourselves, it just fell into place.

Most of the writing was done by Vince and myself, with great contributions from Caro and a few others. I’m a backing track guy with melodic ideas, Vince is a very skilled lyricist and top liner. The combination proved to be perfect. Writing was easy, we never needed to edit ourselves, it just fell into place. It was crystal clear where we were going. Later on, we also had a few sessions with Caro in the room, and she enhanced the experience even further.

What was Vince Degiorgio’s input to the album style?

Crucial. We defined the creative direction of the project and wrote the songs. Vince is a constant source of inspiration for all of us. He is able to write lyrics and text that propel you straight into the right atmosphere, it’s unheard of. Also, he’s very funny and is extremely productive. We usually spend 30 minutes writing and then 30 minutes watching funny videos on YouTube. Still we never needed more than about an hour to knock out a new song. We even surprised ourselves. What helped was that Vince and I share a love for music and entertainment from the 40s and 50s.

There’s a blend between evocative old musical styles and sounds, great grooves and more contemporary hip-hop sounds and beats. Who decided how the blend between all the elements should work?

Sound and production wise, “Back It Up” was our model track too. The beat had been produced by Jan and Robin Veldman, a great track-master who’s also in the Grandmono production team. We were so inspired by the sound, it worked so well. The exotic instruments, the old recording techniques, the ballroom glamour, perfectly blending with a hip-hop beat: we knew right away, let’s stick with this and turn it into our own thing. We wanted the album to sound like a 50s movie score, created for modern radio.

Can you outline the production process and how you utilised M-Tron within the tracks?

The production process was something else. Jan and I spent an unthinkable amount of time sculpting the sound of the album. I kept arranging and re-arranging to the day we went to the mastering studio. Jan did the same with the mixes and sound. Jan’s ears are unbelievable, he’s a true genius with sound.

A lot of people around us seriously thought we had lost it completely. But their reaction to the songs always reminded us that we just had to do it, we had to give it our very best shot. We wanted to show what two crazy guys from Amsterdam could do. During 2008 and 2009, we spent most of our time in an 8 m2 sound proof room, trying to find the right balance between old school sounds and modern beats. We never failed to push the limits – Jan and I are complete maniacs. While working on the backing tracks, we had setup a recording kit with an old Philips pre amp at Caro’s place, so she could record her vocals at her own place and pace. It was a great 2 year adventure. In essence, we created the record the way Rafael Nadal plays tennis, like we were broke. We had nothing to lose.

From writing to producing, the M-Tron was a constant source of adrenaline. I always turned to it for new ideas, loops, gritty sounds, noises, additional harmonies, you name it. It added tons of character and unique elements to the arrangements. We also used M-Tron instruments and tiny bits from loops to double up. I used to call it our time machine, it propelled us right into the long gone era we were aiming to revive.

Naturally, we recorded a lot of instruments ourselves, using recording and processing techniques from the old days. We did some pretty unusual things, to say the least.

All in all, the M-Tron played a pivotal role in the songs and sound of Caro Emerald. Without it, the record would not have been the same. I mean, “Riviera Life”, “Stuck”, “A Night Like This” are all based on M-Tron loops. What can you say? I loved to work with it. The sound is so warm and the grooves are irresistible. It’s everything we needed and much more.

Do you use any other GForce instruments?

We’re a bit busy, trying to conquer other territories with Caro which is going very well. We just scored our first international #1 hit with “A Night Like This” in Austria, and Germany is also going through the roof. I oversee the business side of the project as well, which means I have a lot of things to attend. But we have a great team, so I can spend more and more time getting back to writing and producing. We’ve started to work on songs for the next album. Besides, we aim to build a studio complex in Amsterdam, and do some outside work or new projects with the Grandmono team. It’s a lot, but we like it that way.

Everything but my girlfriend! Seriously, these are great times for songwriters, producers and record labels. I can go on for hours about it, but this may not be the right time and place.

What’s the best number on your mobile?

Personally I like the number called ‘3’. A worldwide #3 hit would be a great impossible goal for us, come to think about it.