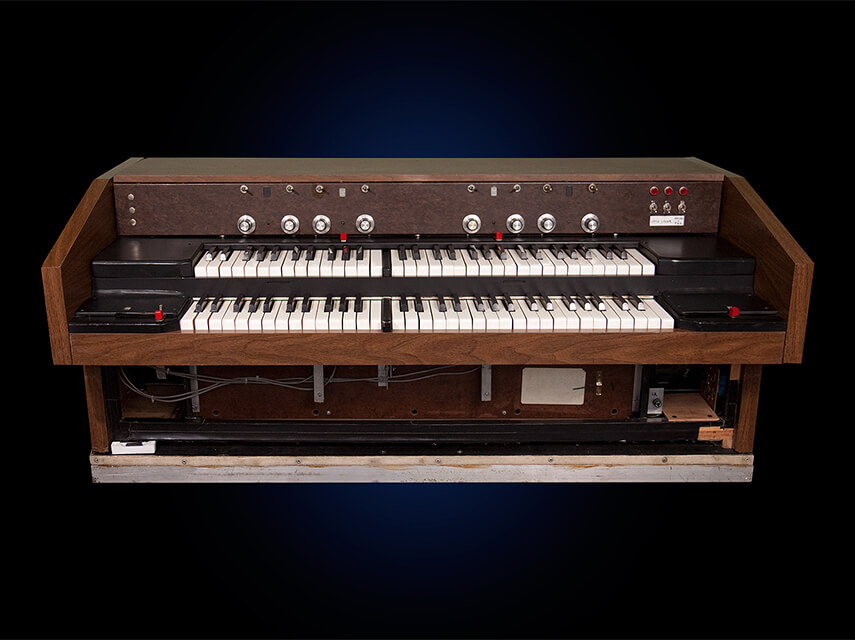 In terms of musical influence, as far as we’re concerned, the debt owed to Harry Chamberlin is right up there with the likes of Bob Moog. Bob may have been at the vanguard of popularizing synthesis but he certainly didn’t invent it. Harry, on the other hand, single-handedly invented the entire concept of tape playing instruments.

This includes drum machines designed to replay pre-recorded drum loops, as well as keyboard based instruments that replayed the sounds of everything–banjos, pianos, clavinets, guitars, strings, brass and much more.

The drum machines were given the moniker ‘Rhythmate’ and the first commercial Chamberlin product was the Rhythmate 100 released in 1952.

It should because the Chamberlin gave birth to the Mellotron, albeit via a bizarre set of circumstances.

The story goes that Harry hired his then window cleaner, Bill Fransen, as a salesman and very good he was too. Orders grew but due to some reliability issues, repairs grew too. Because of his belief in the product it seems Bill vowed to solve these problems and at one point vanished.

Unknown to Harry, Bill had actually got on a boat to the UK armed with two dual manual MusicMaster 600 keyboards

Harry didn’t have any distribution agreements in place, preferring Bill to sell directly, it was assumed that Bill was simply travelling across the US selling directly to musicians, music stores and cocktail lounges as usual.

However, Bill had actually got on a boat to the UK armed with two dual manual MusicMaster 600 keyboards and upon arrival put an advert in a newspaper looking for manufacturers of matched-tapeheads. This was duly answered by Les Bradley, one of the owners of Bradmatic, an engineering firm who had been making tape heads since the 1950s.

Bill managed to convince Bradmatic that the MusicMaster (which had by this time been rebadged as ‘Franson’) was his invention.

At the subsequent meeting Bill impressed Les and his brothers and the short version of the story is that Bill managed to convince him that the MusicMaster (which had by this time been rebadged as ‘Franson’) was his invention. A deal was struck and Bradmatic started work on what was to become the Mellotron Mk1.

However, this story isn’t about the Mellotron and it should be noted that once the Bradley’s found out about the infringements of Harry’s rights they behaved honorably, instigating a meeting and then settling with what was a substantial amount of money in 1966.

Without doubt, this money allowed Harry to refine his instruments further and in 1970 the MusicMaster range of keyboards gave way to the more mature and robust M Series.

One of the best ways to distinguish between the MusicMaster and M-Series is in concept. The truth was, Harry wasn’t a rock music fan and the Musicmaster’s weren’t built with these musicians in mind.

Gone were the big band rhythms and accompaniments and gone too were the troublesome tape station headaches.

However, thanks to The Beatles and others the Mellotron had shown what was possible if a manufacturer catered for this market and the M-Series was effectively Harry’s version of the M400, albeit more portable in the case of his single manual M1. Gone were the big band rhythms and accompaniments and gone too were the troublesome tape station headaches.

The M1 came with eight sounds (as opposed to the M400’s 3) and other M-Series variations included the M-1 Remote – a keyboard-less cabinet allowing M1 users to add an extra 8 sounds. The M2 – a two manual variant of the M1.

Then there was the M4.

There were only four M4s made which makes them seriously valuable now. Actually every Chamberlin instrument is highly sought after these days – testament indeed to both Harry’s vision and engineering and musical skills – but the M4 is the Holy Grail of tape playing instruments and speculation is rife as to where the mythical four M4s are now.

To the best of our knowledge The Audities Foundation has one. We also know for a fact that actor Vincent Gallo owned an M4 until he gave it to Sean Lennon…. which leaves one more to trace.
And before you start an email telling us that our math doesn’t add up, well, we shipped the other one from the USA to the UK several years ago and I’m staring at it as I type. In fact it’s one of the instruments included in the ChamberTron Expansion Pack for M-Tron Pro.

We actually own several Chamberlin instruments and this fact is vital when considering the expansion pack. Put simply, these sounds haven’t come from tapes of dubious origin. These sounds have come from instruments that we’ve purchased, maintained and continue to love. Indeed, the money from ChamberTron sales will go back into maintaining them in the hope of preserving them for years to come.

Sonically the Chamberlin has a more ‘open’ sound than the Mellotron and Harry’s exacting recording process, using top grade Neumann U47’s and the like means that Chamberlin sounds are easily confused with the real instruments. An issue that regularly caused problems with the US Musician’s Union and undoubtedly contributed to only four M4 instruments being produced.

There’s more natural vibrato within each Chamberlin sound too, and while these details helped the Chamberlin set itself apart from the Mellotron, there is one sound that’s shared between both libraries – the legendary 3 Violins.

As the 70s gave way to the 80s, the demand for the synthesizer grew in seemingly inverse proportion to their prices and truly mechanical instruments such as the Chamberlin fell from grace. The last Chamberlin M1 was manufactured in 1981.

Harry Chamberlin – the true forefather of sampling and a pioneer of all tape based musical instruments – passed away in 1986.