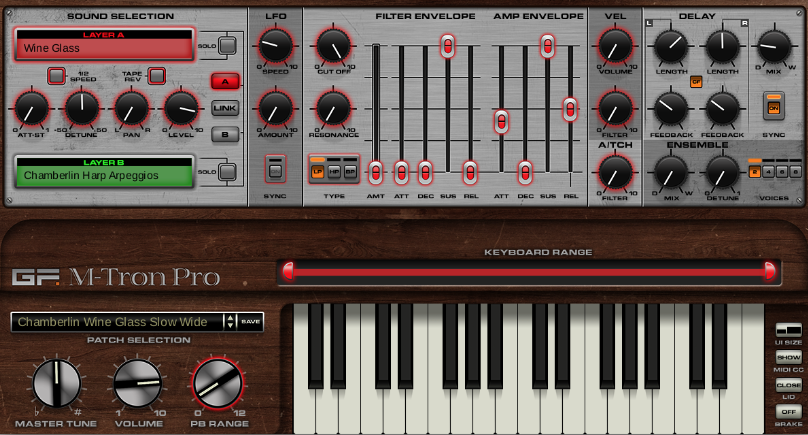 However, the sad truth is that we’ll probably never know all the recordings the Chamberlin appeared on because the American Federation of Musicians kicked up a huge fuss back in the day and even banned the four manual M4 completely.

Aside from the 3 Violins sound, (originally called ‘Violins’ on the Chamberlin) which appears on both the Mellotron and Chamberlin library, all other sounds are unique to each manufacturer and while arguments continue to this day as to ‘which is best?’ we’ll ignore such a fundamentally stupid question and state that Chamberlin recordings are widely acknowledged to have a more natural and uncompressed quality about them.

Chamberlin sounds also contain more natural vibrato and with the Chamberlin M series keyboards, the tapeheads had a greater bandwidth than the M400 equivalent which gave it a more ‘hi-fi’ edge.

This expansion pack focuses on the sounds from the Chamberlin keyboards, in particular our extremely rare four-manual Chamberlin M4 and one-off M1 Remote with custom MIDI Interface.

The M4 is one of only four made. It cost over $10,000 when new, in the early 70s, and was originally owned by Three Dog Night. Weighing in at a mighty 300 Kilos and containing 32 tape banks, it’s amazing to us that Three Dog Night actually toured with it especially considering the constant adjustment necessary to keep it in tip-top working order. Other M4 owners include Mike Pinder and Mitchell Froom & The Lettermen.

Given its rarity it’ll come as no surprise that we’ve spent a small fortune acquiring it, then restoring it properly and now maintaining it. This is a truly beautiful sounding instrument and we hope you’ll be as blown away with the M4 sounds that help make up this collection as we are.

Similarly, our M1 Remote is one of only six made and rumoured to be one of only four still alive. Ours also has the unique honour of being controlled by a custom built MIDI interface and was restored by Richard Chamberlin (Harry’s son) for actor Vincent Gallo before finding its way into our hands. While it contains the standard eight sounds, it’s the quality of these sounds that speak volumes.

Finally, some sounds that have been taken from a Chamberlin 600 as well as a unique ‘Variety’ effects tape made for a Rhythmate 25 tape-based drum machine.

According to Richard Chamberlin, the only other Rhythmate 25 he’s aware of is owned by Chamberlin player par-excellence, Patrick Warren. However, it seems that our ‘Variety’ effects tape for this drum machine may be the only one in existence. That helps make this expansion pack a unique treasure trove of beautiful rarities.

Naturally though, some audio restoration work has taken place. Over the years some tapes have become worn and on a few sounds demagnetization has occurred, such are the joys of magnetic tape-based instruments.

Where a note has been sufficiently damaged enough to become a problem, an adjacent note has been pitched and supplemented.  However, we have been very careful in any noise reduction process not to squeeze the life and character out of the sounds. Thankfully though, given the original immaculate recording process (Harry was smart enough to use Neumann U47s on the recording sessions) and the trouble taken in maintaining the instruments properly, we had such a good starting point there was no need to be savage.

The only soundest that is not a bona-fide Chamberlin sound set is the second effects bank. This bank is something that we recorded ourselves and contains squeaks, squeals, snatches and tape rewind noises, in addition to a few musical ideas created and recorded by ourselves. Someone, somewhere will undoubtedly make good use of these and we can’t wait to hear how. Please keep us informed.

As a footnote, although reliable and corroborated information is hard to come by, it’s estimated that approximately 700 Chamberlin instruments were made between 1951 and 1981. However, it’s no denying that the Chamberlin M1 was the most reliable and the M4 (and Harry’s personal version of this, The Riviera) the most coveted. In this collection you have the sounds from both of these instruments together with patches created by some of the finest sound designers, artists and real Tron users out there, including David Hentschel (Genesis, Elton John), Dean & Jarrod (I Monster), Richard Norris (The Grid & Beyond The Wizard’s Sleeve), Gaz Williams (Rocketgoldstar) and Jem Godfrey (Frost).