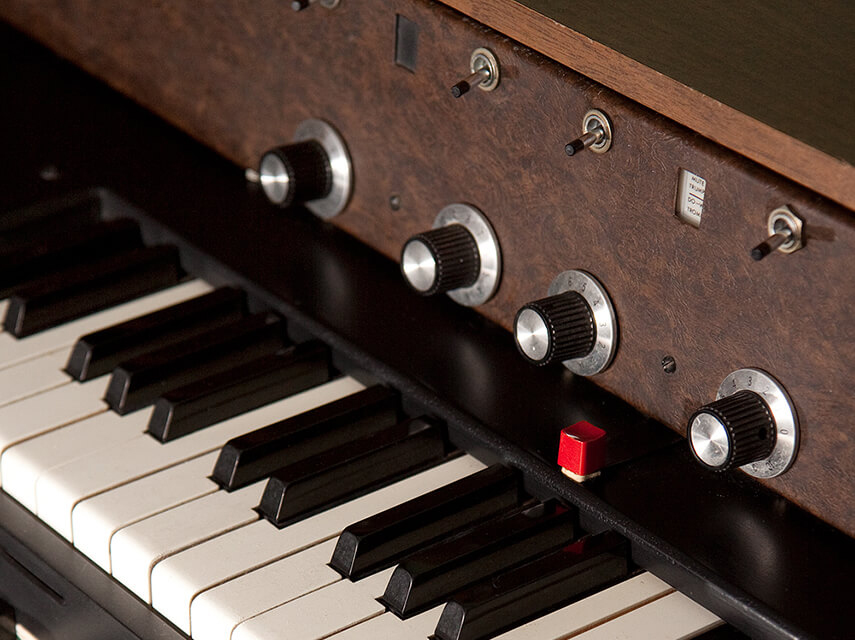 To say we’re obsessive about Chamberlin Tape Playing instruments is putting it mildly. To us Harry Chamberlin was one of the true industry pioneers and without his work the musical landscape would have been vastly different.

Much has been written about both Harry and the way the Music Master 600 morphed into the Mellotron® Mk1 and we’re not going to comment any further. However, being die-hard Mellotron lovers, when we discovered this connection many years ago we set about exploring the intricacies of Harry’s instruments and the history of the Chamberlin company in detail.

The result was that this exploration turned into a full-blown obsession with the result that we now own several Chamberlin instruments, including three coveted Rhythmates, a couple of Keyboards and even a unique MIDI M1 Remote.

Like all truly inspirational ideas, Harry’s was born from necessity coupled with curiosity and after recording himself playing an organ he had the idea of using tape to record individual notes of a sound and then assigning each piece of tape to different chromatic keys. When replayed, each key would then replay a particular sound at the appropriate pitch and instead of being limited to the sound of an organ, he could, in theory, replay the sound of any instrument.

Like all truly inspirational ideas, Harry’s was born from necessity coupled with curiosity…

This wouldn’t necessarily have to be limited to individual notes either because anything that could be recorded could be replayed, such as drum loops or entire band motifs. And after refining several prototypes Harry’s invention was unleashed in the 1950s. To all intents and purposes, this made Harry the founder of sampling and subsequent instruments included keyboards that replayed motifs and individual notes as well as drum machines that replayed looped patterns.

The drum machines came in a variety of different models, some were standalone devices that needed hooking up to an amplifier and others were build into amplifiers that also offered musicians the chance to plug in their own instruments and play along.

The keyboards also came in various guises from the dual manual Music Master 600 right up to the Rolls Royce of the range, the mighty M4. The most popular Chamberlin keyboard was probably the single manual M1 and this has been used over the years by a wealth of artists from David Bowie to Patrick Warren. However, all Chamberlin instruments were made in very limited quantities and as such it’s rare to find them for sale these days. It’s even rarer to find any Chamberlin’s in Europe because of the strong foothold Mellotrons had in this part of the world. In short, if you lived in the US you were more likely to buy a Chamberlin but if you lived in the UK it would be a Mellotron – indeed, talk to most musicians in the UK now and they will only have heard of a Mellotron.

One of the rarest and desirable of all the Chamberlin keyboards has to be the gargantuan, four manual M4. There were only four ever made and originally these were used by uber successful bands and musicians such as Mike Pinder (The Moody Blues) and Three Dog Night. It cost over $10,000 when new and caused quite a fuss with the US Musicians Union in the 70s who feared that it would put musicians out of work and tried to have it banned.

We’re fortunate to own an M4 which we’ve spared no expense in having fully restored and playing it is like being the captain of a huge luxury cruise liner. The sounds are sublime, from the eerie vibes to the beautiful strings and nostalgic sound effects, everything about the sound of this instrument just exudes the tones of a bygone era. In comparison to the Mellotron, the sounds are more hi-fi sounding, possibly due to the tapeheads but also due to the very exacting recording process Harry undertook. They’re is also a little more vibrato in each sound which we understand is simply down to being a popular playing technique at the time.

The only sound that the Chamberlin and the Mellotron share is the truly legendary Three Violins tape.

Another super rare Chamberlin we own is the M1 Remote.

The Remote was originally designed to supplement the M1 keyboard and add another 8 sounds. This means that the Remote has no keyboard of its own and was simply triggered by the M1’s. Ours is unique in that it has a custom built MIDI interface which allows us to trigger it from a normal MIDI keyboard or via a sequencer.

The sounds from these instruments are available as part of the ChamberTron Expansion Pack for M-Tron Pro with full details in the video below and at the ChamberTron page.