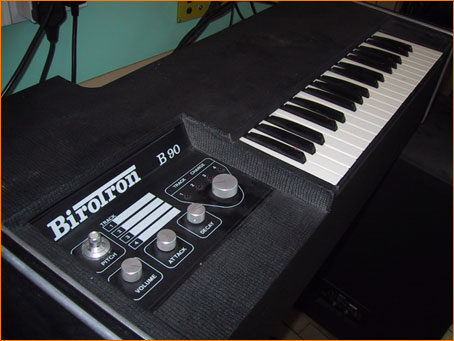 A collaboration between Dave Biro and Rick Wakeman, like the Orchestron the Birotron® was designed as an alternative to the Mellotron.

Unlike the Orchestron which eschewed tapes in favour of optical discs to achieve infinite sustain, the Birotron opted for 8 track cartridges containing tape loops.

Nineteen cartridges were used in order to spread the sounds across the keyboard and there were four sounds per cartridge. There was a lovely vernier pot to control the pitch and attack and decay knobs to soften the front and tail of each sound.

In theory this was a great idea but ask anyone who’s played one and the first thing they’ll explain is that the sound of 19 tape cartridges in motion, constantly rattling away is a little disconcerting. Additionally, with continual mechanical motion comes the spectre of wear and it’s fair to say that the Birotron was yet another tron variant that wasn’t particularly reliable.

Very few Birotrons were made and although estimates vary between 10 and 30, one thing we do know for sure is that Rick lost a considerable amount of money in its short lifetime.

So why do we love it? Well, it’s yet another madcap instrument born of an era where people tried to push boundaries and explore different avenues. It’s also an instrument whose raison d’etre doesn’t appear to be that of an all conquering big selling keyboard. Instead it appeared to be born more out of love and the challenge of trying to solve a problem in an imaginative if slightly oblique manner.

Oh…and if you’re wondering what it sounded like, we think it’s somewhere between the Mellotron and the Orchestron. However, don’t take our word for it. We recorded the tapes and included them in the M-Tron Pro Library so you can check them out for yourself and see if they work for you.