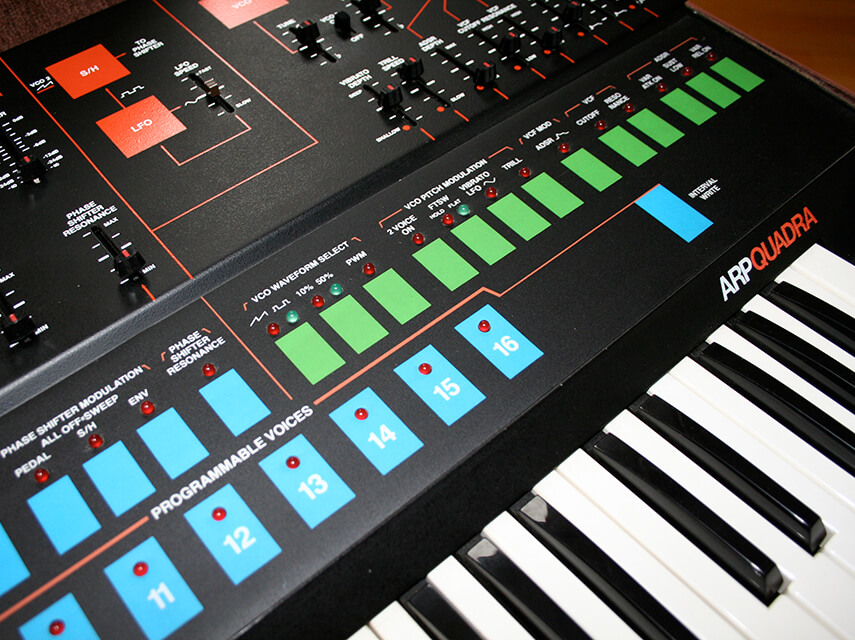 This instrument was ARPs slightly left-field attempt at tackling the growing demand for polysynths way back in 1978.

We’d already seen the Oberheim SEM based instruments pave the way but it’s fair to say that these were big unwieldy beats more comfortable sitting in the studio as opposed to a tough life on the road. Yamaha’s CS80 had also been released in 1977 but, again, its portability rating wasn’t high, unless you had a couple of techs – or roadies as Chris still prefers to call them.

The Quadra was far more portable and indeed played chords, although it wasn’t strictly polyphonic, instead using divide down oscillator technology for the Poly Synthesizer’ section of the instrument.

We say ‘section’ because the Quadra is a hybrid instrument containing a Lead Synthesizer, a Poly Synthesizer, Strings section and a Bass Section.

The general opinion is that that the Quadra was an amalgamation of ARPs Omni and Odyssey but when you look at the on-board features you quickly realise that the Lead Synthesizer section was vastly inferior to the Odyssey and while not as basic as an Axxe was probably more akin to the two VCO Solus.

…it was both portable, programmable and, in our opinion, very handsome. As a result it was adopted by many musicians for live use including Genesis’ Tony Banks and Pink Floyd’s Rick Wright.

The Poly Synth section was nothing spectacular either, with 4 and 8 ft waveform generators processed through a VCF and VCA as well as a straightforward LFO section. Nonetheless, the sum of its components resulted in an instrument that sounded very good. Plus it was both portable, programmable and, in our opinion, very handsome.

As a result it was adopted by many musicians for live use including Genesis’ Tony Banks and Pink Floyd’s Rick Wright.

Sadly though there were problems with the instrument. We’ve already mentioned the fact that the divide-down oscillators didn’t make it a true polysynth, and the fact that the Poly Synth section was rather limited in scope. The programability was also a bit of a fudge.

Additionally, the Quadra’s keys suffered from the same overhang and exposure as the Odyssey MkIII which meant that any roadie not taking the utmost care would inevitably break a key at some point. Also, because this instrument was released at the start of ARPs difficult days, some corners were cut with regards manufacturing – we’ve heard rumours from a very reliable source that ARP failed to put any primer onto the metal front panel for at least one production run which means that the paint easily chips. As a result of these problems, finding an intact instrument is very unlikely.

You have to admit though, in tip-top condition it’s a handsome looking instrument and one that is capable of creating some well-groomed sounds in the right hands.

Of course, it was never going to make a difference to sales of the impending Prophet 5, to which the 1978 polysynth crown rightly goes. Nonetheless, for all its shortcomings, the Quadra remains one of our favourite poly instruments of that era.