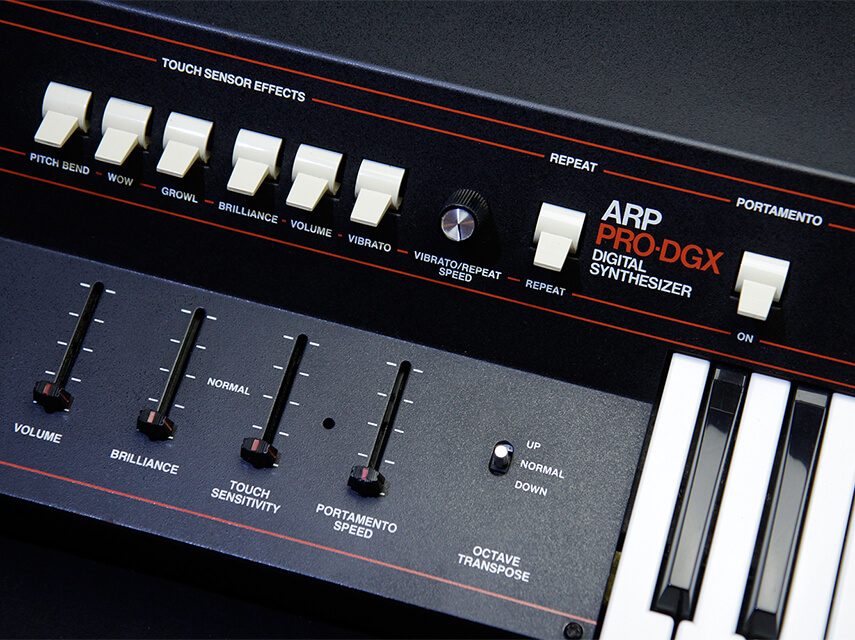 The original ARP Soloist was released in 1971 and was the polar opposite to the gargantuan ARP 2500 modular, in that it was a small and simple preset machine with the sound selectors underneath the keyboard.

By all accounts the Soloist wasn’t a particularly reliable instrument and was fairly quickly replaced by the Pro Soloist which upped the ante from the Soloist’s 18 presets to 30 giving the user instant access to the aural delights of Bassoon, Oboe, Sax, Clarinet, Tuba, Violin, Viola, Bass & Piano as well as other more contemporary sounds such as Fuzz Guitar, Pulsar & Space Reed.

Legend has it that the Pro Solist was Tony Banks’ first synth and the Fuzz Guitar 1 preset use on the In The Cage solo seems to have had Genesis fans salivating in perpetuity. Other artists who embraced it included Donald Fagen (King Of The World), Chick Corea, Gary Numan, Tom Costa and Junie Morrison who used it on the track Funky Worm. Tangerine Dream loved it so much they recorded the Fuzz Guitar and Country Guitar sounds onto their Mellotron tapes so they could play them polyphonically. In fact, these sounds are so good we tracked the tapes down for use in the M-Tron Pro library.

In terms of features, the Pro Soloist was a monophonic, single oscillator synth that generated Pulse and Sawtooth waveforms.

Well…when I say Sawtooth, the truth is that in order to keep costs down the Sawtooth waveform is derived from 5 pulse waveforms summed to create a 64 step waveform that’s very, very close in shape to a Sawtooth. Clever eh?

There are also three resonator banks that tailor the filtering, together with a low pass filter and envelope generator, all of which converge to create your ready made presets. This is all behind the scenes though and what the player ends up with is minimal set of controls so they focus on what matters most to a real player….the performance.

The performance was further enhanced by what we regard as the killer feature, namely an expression section that gave the player control over things like vibrato, pitch bend, brilliance, growl, wow & volume via a pressure sensitive keyboard. Yep, despite there being no velocity sensitivity, with the original Soloist, ARP had created the first mainstream synths with aftertouch.

The Pro Soloist was replaced by the Pro-DGX in 1977 and this did away with the fragile paddle switches in favour of buttons with LEDs indicating the currently active sound. However, this and a change of filter, to circumnavigate a Moog infringing filter, are about the only differences between the Pro Soloist and its successor.

Naturally, due to the filter change, there’s some debate as to whether the Pro-DGX sounds as good as the Pro Soloist, but in a way this debate is negated by the fact that no matter which incarnation you have, the vibe for this instrument is about playing – not the technical spec that all too often surrounds synths before drowning them in a sea of comparisons.

Sure, it’s not going to set the world alight but it can be just the ticket when you find yourself getting bogged down with more complex instruments when all you’re really looking for is something simple, effective, expressive and equally importantly….vibey.

Sure, it’s not going to set the world alight but it can be just the ticket when you find yourself getting bogged down with more complex instruments when all you’re really looking for is something simple, effective, expressive and equally importantly… vibey.