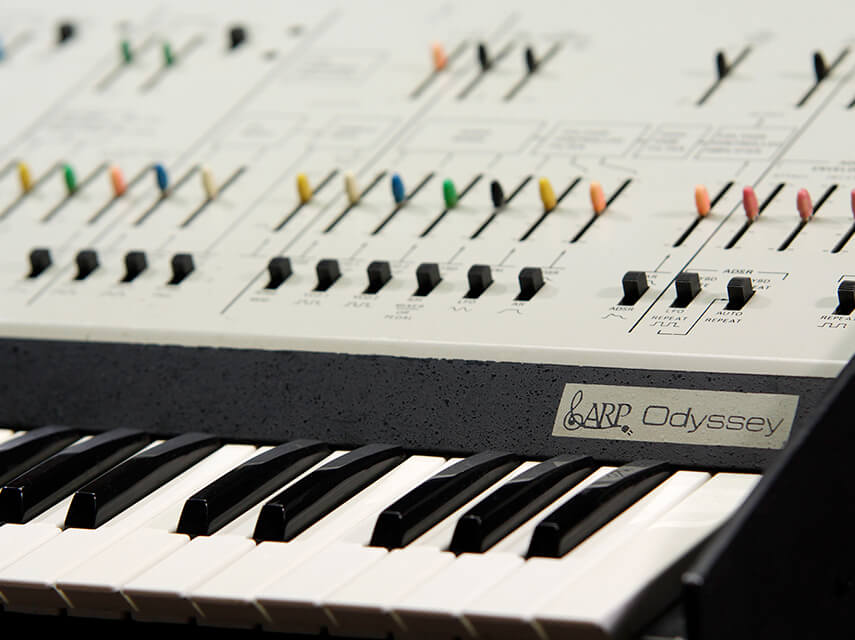 While filming the Bright Sparks documentary, ARP founder Alan R Pearlman revealed that while the Odyssey’s forefather, the ARP 2600, was designed by himself and Dennis P Colin, the Odyssey was designed by David Friend, the same person who cooperated with Korg on their recent re-issue after Alan declined.

Like the ARP 2600, there were different original Odyssey models, each sporting different components and livery that can prove a bit of a minefield at times, especially when buying one. On the surface it seems simple. Whiteface models were the first and are considered to be MkI’s. Black and gold coloured models are known as MkII’s and the MkIII’s are orange and black. However, in reality there were different filters which crossed over the colour schemes and, in our experience, the only reliable way to know what’s inside is to open one up. For example, MkI whiteface models are supposed to have a 12dB 4023 filter but we’ve found at least two with the 24dB 4035.

In some ways it’s easier to define the version by the filter type instead of the livery or Odyssey model number, and there were three filters that spanned the Odyssey’s lifespan. Firstly, the 12dB 4023, which contrary to what you may have heard, sounded great. Secondly the alleged infringing 24dB 4035, the story of which Alan tells in the Bright Sparks documentary. Finally the 24dB 4075. This filter included an error which limited bandwidth to around 12kHz but thankfully this could be easily rectified and, indeed, many were. Even without the upgrade this filter still sounds great. It’s nice and beefy at low resonance settings but when the resonance is cranked up it has a tonal character that’s distinctly ARP-like.

Our relationship with the Odyssey is long and well-known. We love its tone so much we decided to model its inner workings and operational design for Oddity and Oddity2, with the latter providing a wealth of features never included on the original such as polyphony, massive modulation potential, patch memories and patch morphing.

For us, the Odyssey is slightly more of a players instrument than the 2600. It’s duophonic capabilities combined with the ring modulator gives a certain tone that’s never been captured fully on other rival instruments, including the recent Korg re-issues.