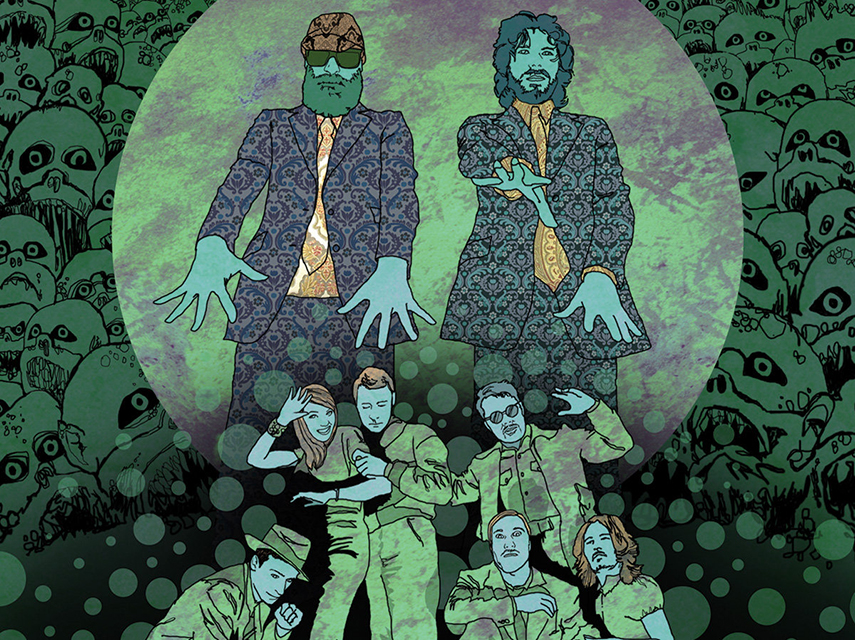 Sucker For Your Sound

Everyone who knows us understands that we love the slightly esoteric and oddball. For us ‘character’ and ‘vibe’ is an essential part of the creative process so we always try to work with people who inspire us in that way.

I Monster are definitely a band that fall into this category and having been long-term M-Tron users, when they agreed to do sounds for the M-Tron Pro we were honored. We knew that the combination of the instrument and I Monster vibe, we’d be in for a real treat.

From the early days as All Seeing I and the remix of Buddy Rich’s version of The Beat Goes On, to the epic Daydream In Blue and the Shaun Of The Dead Theme, The Blue Wrath, it’s clear these guys have character and vibe in abundance.

They didn’t disappoint us either, providing patches that are both characterful and supremely vibey. So who better to have as our featured artists at the release of the M-Tron Pro?

So who are I Monster and what’s the background?

Jarrod: I’m Jarrod and he is Dean. We met in the music lending section of Sheffield Central Library during the age of steam.

Dean: We had a chat and found that we were both fans of Sheffields Warp records (the early northern bleepy stuff) and Kraftwerk and other electronic music, We both had little home studios so we decided to try and make some tunes together.

Is it true that the band is named after a horror film?

J: Yes. A 1970 Amicus Studios film called, erm ‘I, Monster’. Notice how we dropped the comma to be anarchic. We wanted an umlaut on the ‘o’ but that would read ‘I Moenster’.

D: Yes. We are both big fans of British horror films from studios such as Hammer and Amicus. We share childhood memories of sneaking downstairs late at night to watch Christopher Lee and Peter Cushing in action. We also have fond memories of Ingrid Pitt and Yutte Stensgaard in action…

Our record label is called Twins of Evil, another Hammer film!

As part of the group ‘All Seeing I’ you had a huge hit with a remix of the Buddy Rich version of The Beat Goes On. We thought it was an inspired choice of remix but how much of a nightmare was the clearance?

D: I was one third of The All Seeing I. Jarrod was never involved in that project apart from appearing in the videos.

The Beat Goes On was a pain to sort out. We sampled a live Buddy Rich cover of the Sonny and Cher song. So there were a lot of lawyers to deal with. Sonny Bono had just skied into a tree and departed for the great piste in the sky, so we had to deal with his estate lawyers. Needless to say we never got any kind of split on the publishing, but we had to pay both Buddy and Sonny for clearance.

All Seeing I seemed to be a bit of a Sheffield collective. Who else was involved?

D: The All Seeing I was me, Richard Barratt (DJ Parrot) and Jason Buckle. Initially we were making sample based music for Parrots Earth Records label.

We released a single called I Walk which caught the attention of London Records who then signed us after hearing some of our other tracks, including The Beat Goes On.

On the one album we recorded, Pickled Eggs and Sherbet, we had various Sheffield guest artists. Phillip Oakey, Jarvis Cocker, Tony Christie and Steven from Baby Bird.

What happened to that band? Does it still exist or has it effectively morphed into I Monster?

D: We kind of took it as far as we could, three good top 30 singles and an album. Jason moved down to London and began working on a band called Relaxed Muscle with Jarvis Cocker. Parrot and I still do some writing and production together if the project is right.

What’s the division of labour between you?

J: We both have studios which are compatible, so we work on stuff individually and bring them together for the cooking pot.

D: This often depends on the individual song. On the latest album, (to be released early next year), Jarrod would tend to seed the track at his home studio and bring it over to my studio for us both to work on. Sometimes the song would be almost complete and would not need much doing to it, other times we would completely rewrite.

There are a few songs on the album that I started and Jarrod helped me finish. All songs usually end up at my place for final production and mixing.

We try to play as much of the music as we can on the songs, but sometimes we need to get “proper” players in to help us out. Guitarists, drummers and wind men mainly. Of course there are also guest vocalists. On this new album we worked with a great local girl called Philly Smith.

With I Monster, the single, Day Dream in Blue, was one of those epic summer tracks. How did that track come about?

J: I was working as a waitress in a cocktail bar… no I wasn’t, I was working in a drawing office in Ashton-Under-Lyne and during my lunch break would venture out to this market town’s many stalls and charity shops. Graveyards for old people and easy listening vinyl. We were experimenting with samples at this point.

We needed to add a contradicting response to the summery, soft, Cadbury’s Flake ad feel of the tune, so we threw in some loud rude bits.

I bought what seemed like a bunch of rubbish albums and skipped the needle through them. Nope, nope, nope, nope, wait a minute…that’s good; catchy, big and familiar although I’d never heard it before. It was ‘Daydream’ by The Gunter Kallmann Choir on a double album called ‘Easy Listening’ on Polydor Records. We sampled the best bit. The’Swan Lake’ part of the original song sounded lame. We needed to add a contradicting response to the summery, soft, Cadbury’s Flake ad feel of the tune, so we threw in some loud rude bits. It wasn’t meant to be a ‘chill-out’ track at all. Our original mix is pretty heavy and distorted.

D: This track was originally written in about 1997. It appeared in a quite different form on our very limited addition first album These Are Our Children in 1998. This album is available for a limited time as a FREE download at this address – www.imonsterblog.blogspot.com

What was the vocoder used on the chorus?

D: Correct! A beauty that is now owned by Joe from Reverend and the Makers, though he still lets us borrow it!

Don’t suppose you’d care to tell us what the vocoded section actually says?

J: The lyric would make your hair curl.

The Oddity also gets quite a lot of use by us. Its one of the nicest sounding virtual synths I’ve used.

How do the GForce instruments fit into this?

J: Very well. The M-Tron has tons of obscure sounds that add plenty of atmosphere and character to our kind of sound. The Virtual String Machine’s make an old prog rocker happy.

D: The GForce instruments get a lot of use in I Monster world. We like a bit of dirt and hiss in our music from samples, Mellotrons and old analogue synths. We loved the old Mtron, it appears on many I Monster tunes. So we obviously love the new Mtron Pro! So nice to have the extra sounds, the lovely sounding filters and the ability to easily layer up two sounds.

The VSM string machine is also fantastic. Its easy to call up those Joy Division and Air type atmospheres. It’s great if you don’t have the real thing, but also very flexible as a synth in its own right.

The Oddity also gets quite a lot of use by us. Its one of the nicest sounding virtual synths I’ve used. I am a stickler for trying to use the real thing as I think the sound of a real analogue synth is hard to beat, but the convenience of using a VSTi can be a better choice in terms of workflow and speed.

You very kindly contributed some patches for the M-Tron Pro and listening to the album Never Odd Or Even there’s some great sounds on there. How important is the sound design process in terms of stimulation or the formation of ideas for a new track?

J: Very important, well for some of our music anyway. A sound/instrument can influence a whole lyric or track. Woodwind sounds can take you straight into another time and place and influence everything that follows. For me it’s usually an adventure with dragons, ladies fair and an evil overlord! We tend to work hard on how the track should sound – building up walls of sound and texture. Sometimes we tear them down and start again, if it’s not quite right. It’s part of our design process. We started off making instrumental bleepy electronica so we had to work purely with sound rather than just a ‘song’. It all comes from this I suppose. First and foremost though, we love sound!

D: The new album is quite song based and some tunes originate in the traditional way, from melodies written over chord progressions. But others come from just messing around with synth noises which may in themselves then inspire a lyric or a melody.

How did you find the M-Tron Pro to work with?

J: The original Mtron was dead easy. Although the new Pro has more features, it’s still dead easy! We’re going to have a lot of fun with it on the next recordings. As Vincent Price said in the movie ‘Theatre Of Blood’, “Can’t wait to get my hands on it”!

D: It’s great. The ability to layer sounds and create splits opens up a big world of creativity. The addition of modulation, multi filters and envelopes is also a big step forward in terms of creating totally new sound or just tweaking the classic sounds to fit better into an arrangement. The delay line and ensemble are also very useful!

The layout is very clear and simple even for a pair of doughnuts like us.

D: I love the classic vibes, the flutes and the cello and I love the Chamberlin sounds, the new sax sounds and the remastered looped sounds!

What’s next for the I Monster?

A new single called ‘A Sucker For Your Sound’ will be released soon-ish and the new album will follow in February.

In looking at your wonderful website, and Neveroddoreven album cover, I’ve still not seen a picture of you or Jarrod. Do you really exist?

J: No. We are virtual plug-in humanoids.

Find out more about I Monster