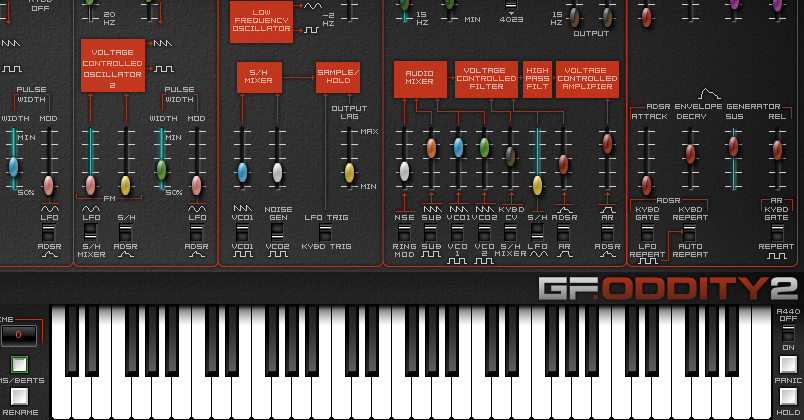 Oddity2 is the successor to the multi-award winning Oddity, modelled on the legendary ARP Odyssey synthesiser, manufactured between 1972 and 1981.

During its lifetime the Odyssey, due to it’s versatile and distinctive tones, was used by artists as diverse as Gary Numan, John Foxx, Herbie Hancock, Kraftwerk, Chick Corea, Roger Powell, George Duke, 808 State and countless others. Ultravox’s Billy Currie refers to it as the ‘first punk synth’ due to its snarling aggression, thanks in part to an on-board ring modulator, oscillator sync and duophonic capabilities.

Sporting a new livery based on the final revision Odyssey, Oddity2 takes the character and operational architecture of the original and via a wave of enhancements, transports the spirit of the original into a new dimension.

Now finally it’s possible to stop wondering what the Odyssey’s classic tones would sound like within the context of chord based structures, and put it into practice.

First up, while the duophonic and monophonic modes have been retained, Oddity2 now also offers a monophonic legato mode which wasn’t evident on the Odyssey, plus a POLYPHONIC MODE. Yes, now finally it’s possible to stop wondering what the Odyssey’s classic tones would sound like within the context of chord based structures, and put it into practice. Everything from spiky and resonant textures to lush and warm pads sounds can either be programmed from Oddity2’s intuitive controls or simply dialled up via the accompanying presets.

Furthermore, via three filter modes and an additional oscillator, Oddity2 can sound as versatile and punchy as its main rival back in the day.

Oddity2 doesn’t stop there either, in order to overcome the original instrument’s limitation of a single LFO, we’ve also added the ability to apply an additional LFO and ADSR to almost any of the main Oddity2 sliders, which gives the instrument almost unrivalled versatility and depth when it comes to sound design options.

Additional improvements over its predecessor include an on-board delay, spread or random pan modes, patch morphing via beats or seconds, program change recognition and implementation of the two octave transpose switch for dynamic real-time performances.

Put simply, Oddity2 further builds on the significance and lineage of the original hardware and software instruments, by taking its fundamental sonic character and, via a raft of carefully considered musical enhancements, transplants it into the hands of those musicians ready to take it to both familiar and new horizons.