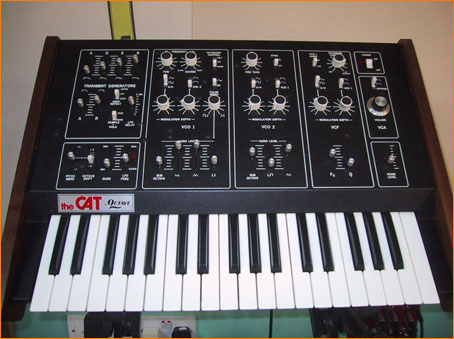 As a kid, GForce’s Dave Spiers used to annoy the salesman in the local music store every saturday by asking to play the demo model of the Octave Cat, probably with the promise of “I’ll come back with the next week. Honestly”

Sadly for both parties, that never happened, but it came as a real surprise to find that very same Cat in Music Technology journalist, Gordon Reid’s synth arsenal in 2006. “It still looked as good as it did back in the day” Dave said wistfully.

The Cat’s origins remain a bit of an enigma. It has spent most of its life under a barrage of claims that it’s a total ARP Odyssey rip-off, a claim that in this day and age of me-too synths, we find a bit distracting. Okay, we accept that there are huge similarities between it and the Odyssey, there are also enough differences to cast a doubt on the mantra trotted out all these years that it was a direct rip off. Maybe an ‘inspired by’ instrument, but not a direct rip-off.

Nonetheless, the story goes that the original Cat’s duophonic mode was too close to that of the Odyssey so the threat of legal action caused Octave to change the design slightly and release the CAT SRM. The verdict is still out on whether this is really what happened, but an interesting fact is that whereas ARP effectively died as a company in 1981, Octave morphed into Octave Plateau, the same company responsible for the Voyetra Eight – the instrument given huge exposure by The Eurythmics’ Dave Stewart – and later the company behind the PC sequencing software, Voyetra.

The layout of the Cat is fascinating too – there are so many similarities and yet differences to the Odyssey .

Even though the Cat became the Cat SRM and later the Cat SRM MkII and although the cries of Odyssey rip-off continued, there were a number of factory modifications offered to the original version that way exceeded ARP’s take-it-or-leave-it Odyssey spec. For example, our Cat has the 12/24dB switch that seems to have been one of the optional extras available.

The layout of the Cat is fascinating too – there are so many similarities and yet differences to the Odyssey that anyone used to the layout of the latter would find it initially quite confusing. For starters the filter is in the wrong place and the AR & ADSR Envelope generators are in the top left corner, as opposed to the bottom right corner of the Odyssey.

The oscillator waveform controls are different too. Instead of switches for sawtooth and square waves on the ARP, the Cat has variable Audio Level Sliders with a Sub Octave slider that helps beef up bass sounds markedly.

We also like the sliders which are certainly more robust than the Odyssey’s and there’s something to be said for the Cat’s coarse and fine tune pots as opposed to the Odyssey’s sliders. Just try freaking out on-stage with an Odyssey, using the ring mod etc, changing those tuning sliders before bringing the thing back into tune. It’s damn near impossible.

However, there’s no ring modulator on the Cat and in terms of raw character it’s somewhat lacking compared to the Odyssey. Billy Currie called the Odyssey “The first Punk synth”.

If that’s true, (that the Cat was the first punk synth), then The Cat, which was also released in 1976, should probably take a bow as the King’s Road Poseur.