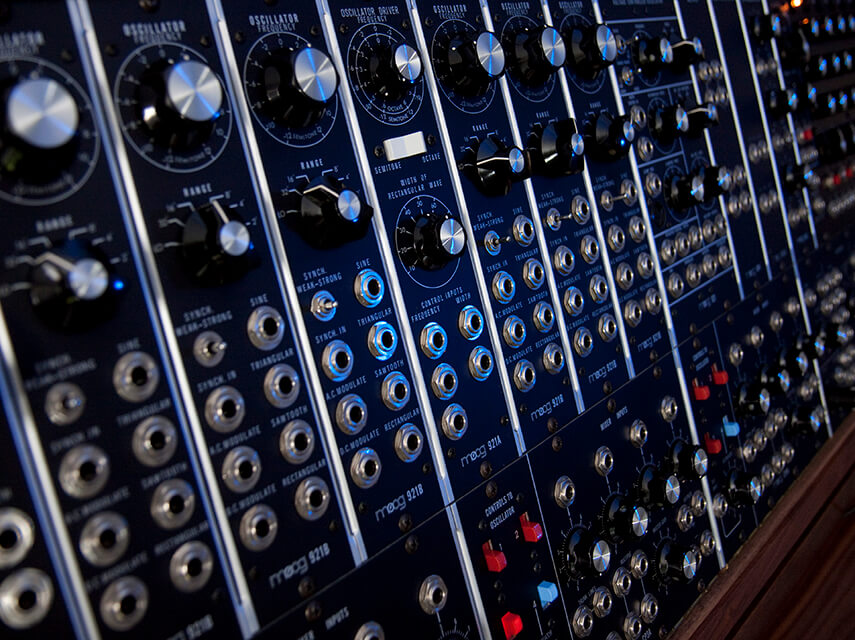 Ask GForce’s Chris Macleod about his time on tour with Keith Emerson’s modular behemoth and he’ll tell an entertaining story.

“It was always breaking down and he only really used it for a few sounds in the show. From a roadie’s point of view, I saw it as something that could be dispensed with, so I went to him with a suggestion that, instead of lugging this beast around, I would sample the necessary sounds into an E-Mu and, hey presto, we’d be several hundred kilos lighter on the truck, and less reliant on the dedicated Moog tech who was along for the duration of the tour, regularly fixing it.

Of course he was right to tell me to ‘bugger off’ and that it was an essential part of the show, but it was worth a try” Chris half jokes.

Tour stories aside, in their various guises, the Moog Modulars sat like big buddhas on the path to synth enlightenment and in the form of the venerable Walter Carlos and his Switched on Bach album the foundations were firmly laid. Out of interest we read recently that Switched On Bach outsold all previous classical releases and infuriated classical purists because it sounded so good.

Much has been written about these monsters and from Carlos to Tomita and Emerson to TONTO’s Expanding Headband, it seems that wherever the modular was used t it created, not just ripples, but big, undulating waves.

We were fortunate enough to interview Bob Moog’s musical partner during the development of the initial Moog Modular, Herbert Deutch, for the Bright Sparks documentary and Herb’s story behind the creation of the instrument is just as captivating as the sound of the instrument. This really was a time of men in garages and sheds trying things to create, stimulate and push the boundaries of electronic music and there’s no denying that Herb and Bob were true visionaries.

GForce’s Dave Spiers first met Bob Moog at the opening of the Museum of Synthesizer Technology in the mid 90s. “It was an amazing day. Bob had been flown over to the UK but not allowed to see the collection in advance. After the opening ceremony, as part of the film crew, I had to lie in wait for him to come in and then capture the look on his face as he saw the ‘Moog corner’.

When he realised how big the Moog corner was, his face lit up in total surprise and he then talked at length about in the various instruments in the collection and what it was like in those early years. He was talking about building hardware on his kitchen table and at one point he looked at one of the modules and mentioned that it was likely he did build that very  module on his kitchen table back in about 1968. We unscrewed it and, sure enough there was his signature in pencil. It was one of those magic moments.”

Anyone who’s played one a proper, full-blown modular Moog will know that the sound is almost beyond reproach. So much so that Moog recently reissued limited runs of the System 55, System 35 and the Model 15. However at prices between $10k & $35k (not including keyboard) they’ll undoubtedly retain an elite and elusive status.