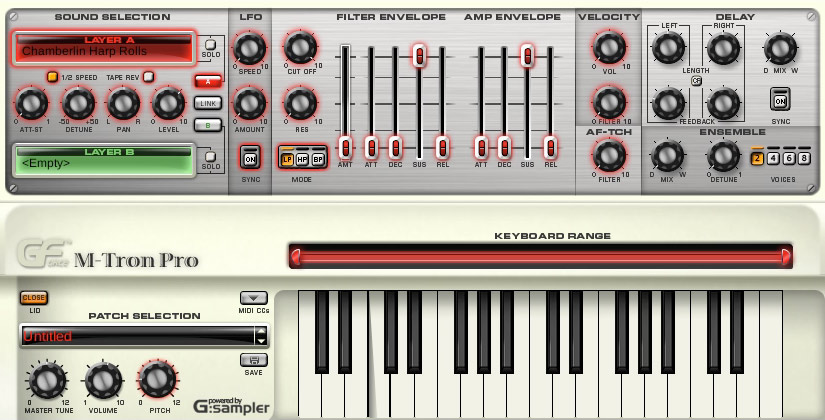 M-Tron Pro is the industry standard emulation of the classic Mellotron – the unique tape playback keyboard originally manufactured in the UK in the early 1960s and made famous by such luminaries as The Beatles, Yes, Led Zeppelin and The Moody Blues.

The 3.5GB sound library features nearly 200 tape banks (sample sets) including those from the world’s first Tron plug-in, the M-Tron. 19 tape banks were also remastered at London’s legendary Abbey Road Studios resulting in a warmth of tone surpassing the originals.

M-Tron Pro also delivers 45 brand-new tape banks and over 700 patches, many created by world-class recording artists and programmers. Simply load these patches for instant nostalgia with a twist, or open the lid to access the easy editing controls for layers, splits, reverse, half-speed, envelopes, and with Version 3 (released May 2019) the new tape ‘brake’ flywheel speed feature. M-Tron Pro can be used in standalone mode (Mac/PC) or as a plug-in for most popular host applications.

A Virtual Classic… and Beyond

Although tape based, the original hardware Mellotron was one of the first sample-based keyboards with every note containing a recording of a chromatic instrument or musical motif. Artists such as The Moody Blues, Yes, Pink Floyd, The Beatles, David Bowie, Led Zeppelin, Genesis and later OMD, Radiohead and Oasis used them to emulate strings, choirs and other orchestral instruments, while the BBC used them extensively for sound effects.

When pressed, each key engaged playback of a discrete strip of tape containing an eight-second recording of a note played on an instrument such as a violin, or a real choir. At the end of 8-seconds the player would release the key and the tape would be rewound. There was no looping and this forced the player to adapt his playing style, thus giving the instrument a unique playing characteristic in addition to its already distinct sound. As such, a looped tron sound is wrong, wrong, wrong! Please don’t be fooled by those who claim it’s acceptable, and we supply 40 looped tape banks to prove that point, emphatically.

The more commercial Mellotron models featured the ability to switch between three different sound sets within the installed tape bank – and adventurous owners were able to physically swap tape banks with care and patience.

We first paid homage to this venerable keyboard in 2001 with the world’s first Tron plug-in, the M-Tron. Its successor, M-Tron Pro, continues to go far beyond the M-Tron’s capabilities and remains as much a labor of love as the original Mellotron that inspired it.

More Under the Hood

Lift the lid of the M-Tron Pro and you’ll discover a raft of easy yet powerful editing controls that take the Tron experience way beyond the imagination of the original inventors.

Quickly create your own splits and layers, apply vintage ensemble and delay effects, and sculpt your sound with low-pass, band-pass and high-pass resonant filters. And that’s just the beginning. You’ll find tape reverse, tape half-speed and a slew of synth-type parameters—making the M-Tron Pro a remarkable source for unique signature sounds far beyond the basic tape banks sounds themselves.

Although we supply nearly 200 tape banks as standard with M-Tron Pro, you can always supplement these with optional collections featuring other oddball hardware instruments from that era, including the Orchestron, Optigan & Chamberlin. Or by adding a expansion pack or two from the originators of the hardware instrument, Streetly Electronics. Recorded from original EMI tape The Streetly Tapes Expansion Packs for M-Tron Pro are truly the last word in true Tron authenticity.

You can use the M-Tron Pro by itself or as a plug-in for most popular host applications including Live, Cubase, Logic, GarageBand, etc.

In other words, it’s easy to integrate M-Tron Pro with the rest of your studio and use it just about any way you want.