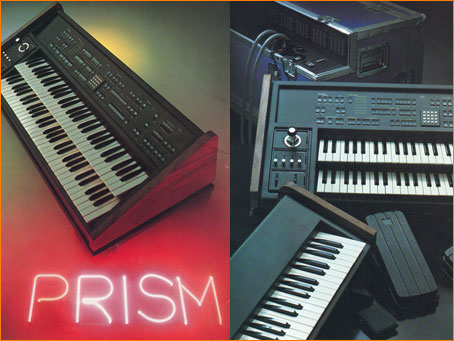 Synth history is littered with brave attempts to change the world of music and amongst these are some remarkable machines, many of which were either made in such low numbers or only as prototypes, that you’ll probably never find them outside of magazine previews or dedicated publications.

One such instrument was the Kinetic Sound Prism, an instrument which we first came across when reading Ray Hammond’s book The Musician And The Micro back in 1983. The Prism promised a tantalising glimpse of the future via a giant two manual synth that wouldn’t have looked out of place on the Starship Enterprise and featured something called Bubble Memory.

The text explained “Magnetic bubbles move around a chip circuit built on a microscopic slice of synthetic garnet and their last position provides a map of the information stored.”

We never saw the Prism in the flesh and it remained an enigma until we stumbled across a brochure for the self-same instrument.

Of course we never saw the Prism in the flesh and it remained an enigma until, during some synth book research ten years later, we stumbled across a brochure for the self-same instrument. This rekindled our interest and we made some enquiries as to what had happened to this leviathan.

A reliable source informed us that there were two Prisms made and that one was shown at a NAMM show back in the early 80s. Sadly that was about the only information we managed to dig out and we realised that we’d probably never find out anything more about it, let alone have the chance to play one.

Fast forward several years and to reading Mark Vail’s brilliant Vintage Synthesizers book where in a chapter talking about such obscure delights such as the Con Brio, the Adaptive Systems Synthia, the Coupland Synthesizer and other such delights, there, once again, was the Prism.

With an intended price of $45,000 this was never going to be a consumer product.

Here, Mark confirmed that there were indeed two Prisms built and it was shown at a NAMM show in 1981. With an intended price of $45,000 this was never going to be a consumer product and obviously the much championed bubble memory never caught on. One of the key people behind the Prism was a James Stephenson Jr and history tells us that this was his only foray into the weird and wonderful world of synthesis.

Nonetheless, regardless of how commercially successful these kind of one-off instruments are, we love these brave attempts to do something different and stick two-fingers up at the bean-counters in the process. Without the continued presence of people like Mr Stephenson Jr and other modern-day mavericks, the essence of that pioneering spirit evident in the early days of analogue synthesis and electronic music would be lost forever.

So, to all those people who have, and continue to look at things from a different perspective and defy all the nay-sayers, we salute you. And remember, sometimes the mad dreams can pay off. For example did you know that one of the main movers-and-shakers behind the Con Brio was someone called Tim Ryan?