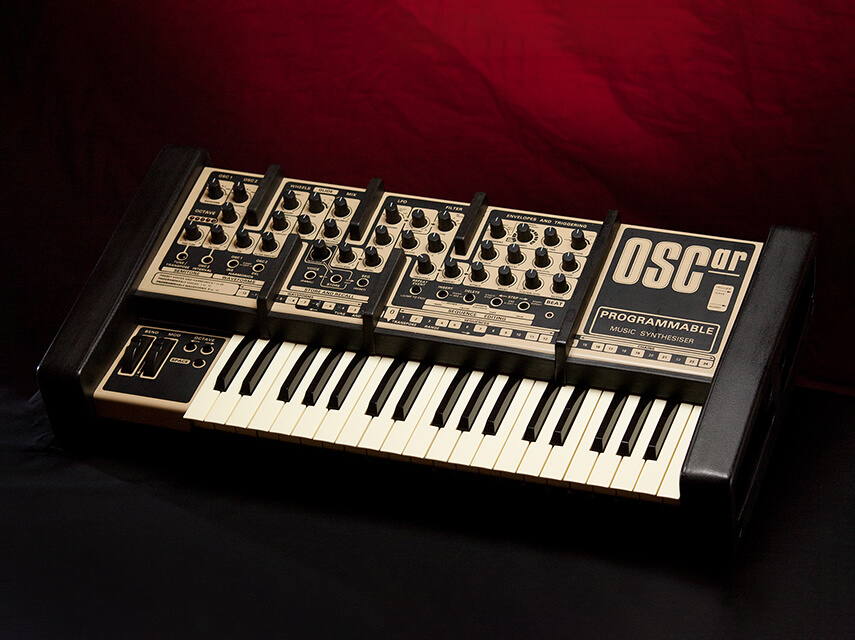 Back in the midsts of time, 1978 to be precise, even a meagre monosynth was beyond the reach of most UK based teenagers.

There they were met with something quite different from the norm in the shape of a small yellow and black box with no real keys but instead a small membrane keyboard, again, in yellow and black.

Some teenagers of a weak disposition felt sick and left, but others parted with their money and returned home to start an enduring love affair with the EDP Wasp.

Some teenagers of a weak disposition felt sick and left, but others parted with their money and returned home to start an enduring love affair with the EDP Wasp.

With its powerful filter and two oscillator design, not only did it sound great, it was portable, affordable and you could link several of them together via a 7-pin din socket to create a sound big enough to blow holes in walls.

The Wasp was eventually complimented by the natty…er…Gnat – a single oscillator Wasp derivative – a Wasp deluxe (yes, a Wasp with a real keyboard at last), a Gnat Deluxe, a Gnat Special, a sequencer called a Spider and a bizarre 4-note polyphonic keyboard called the Caterpillar.

EDP Original Press Releases
An original press release for the EDP Wasp. One of Chris Hugget’s early projects and one that lead to the OSCar. And on the right, the original Press-Release for the Wasp Deluxe. A Wasp with a real keyboard and wooden end-cheeks. Very rare.

Sadly though, even with this roster of products and a resulting synth-pop fad gripping the UK, for various reasons, EDP ceased trading in 1982.

It could have easily been the end of an era but for the tenacity of Chris Hugget, who, with Paul Wiffen in tow, set up the Oxford Synthesiser Company, or OSC in 1983.

OSC’s first, and indeed only product had several things in common with the EDP Wasp, and it too had a magnificent sound.

OSC’s first product, and indeed only product, turned out to have several things in common with the EDP Wasp. It had two oscillators, it was digitally controlled but had an analogue filter. And in keeping with the Wasp, it had a magnificent sound.

Oh, and it had a real keyboard too.

The OSCar was a truly superb instrument offering everything from overdriven filters (for that Ultravox screaming lead sound), Mono & Duophonic options, and Multiband filters with separation control over two resonant peaks to Additive synthesis. More conventional Subtractive synthesis, together with an arpeggiater, an on-board sequencer and patch memories rounded out the impressive featureset.

Oscar
We actually used two OSCars in the creation of the original impOSCar. The one used to A/B against the software was kindly loaned by Underworld, while the one dissected and component modeled belonged to a somewhat nervous Dave.

In short, it really was an awesome beast but it was expensive too. And this, coupled with its arrival at a time when the holy grail amongst synthesists was affordable polyphony, meant that its life was incandescent but somewhat short-lived. A fabled OSCar ASG – a polyphonic OSCar was previewed at one of the Frankfurt music shows but Chris admits that this was butchered for OSCar spares and, sadly, never saw the light of day in terms of a production run.

The OSCar has remained one of the most desirable synths on the planet.

Nonetheless, as testament to Chris’ genius (believe me, having component modeled the OSCar we know all about Chris’ genius) the OSCar has remained one of the most desirable synths on the planet. And while some say it’s the Brit equivalent of the Minimoog and others claim its a pimped-up Odyssey, the truth is that, for those in the know, it remains the secret weapon of choice for many programmers, sound designers and artists today.

As a footnote, thankfully Chris Hugget didn’t vanish from the musical instrument scene and was responsible for many of the great Novation instruments. He is also a true gentleman and we will be forever grateful for his donation of the final revision OSCar firmware when we started to model the original impOSCar.

If you want to buy a good condition OSCar nowadays, be prepared to pay anything up to £3000.