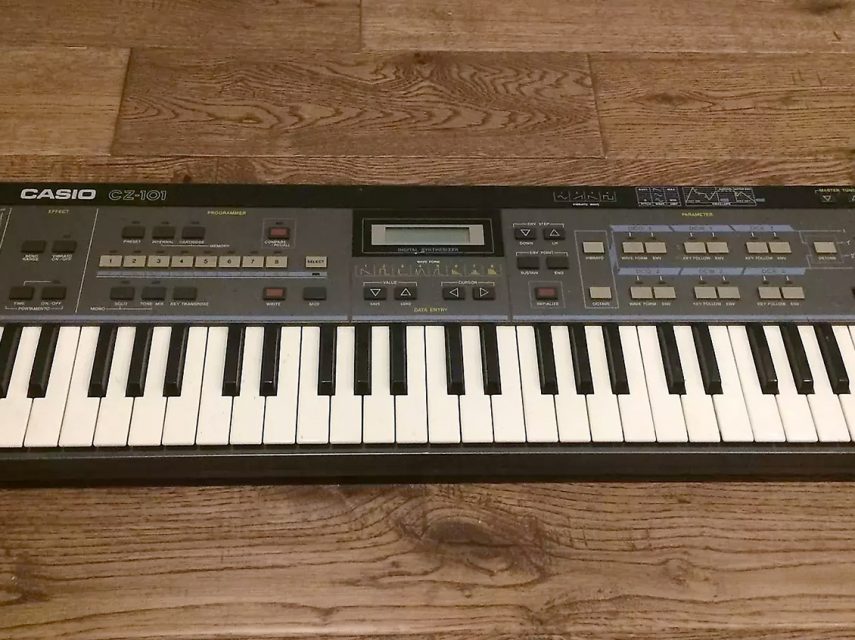 GForce’s Jon Hodgson has been a long-term fan and still owns a CZ-101 and a VZ-8 (which uses a very different synthesis method to the CZ series). Here’s his take on the CZ.

Subtractive Digital Synthesizers are a silly idea, the classic Moog 4-Pole filter needs 10 transistors in analogue form – A 4-Pole audio-rate digital filter takes hundreds. Add a couple of oscillators and you’re probably into thousands, and that’s before you even start trying to do the cool stuff, like the distortions that make real analogue filters sound so nice, or oscillator sync.

These days processors with millions upon millions of transistors sell for very little, but back in the early eighties things were very different.

These days processors with millions upon millions of transistors sell for very little, so we can implement these very inefficient designs if we want the sound, but back in the early eighties things were very different.

The processing power required to implement even a monophonic digital subtractive synth would have been prohibitively expensive (not so much home recording as sell-your-home recording), so manufacturers needed a different approach.

The most famous and successful was Yamaha’s FM synthesis. Six sine waves (four on the DX9), modulating each other according to various algorithms. The success of this technology was overwhelming, and was not seriously challenged until the end of the eighties with Roland’s D50, and Korg’s M1.

There was another contender though…

When Casio were looking for a solution FM synthesis (actually it should have been called PM, since it was phase modulation rather than frequency) was almost right, there were only three things wrong with it:

So Casio came up with a related, but computationally simpler system, called Phase Distortion.

Aside from being free of Yamaha patents, and being simpler and thus cheaper to implement, PD had the great advantage of actually being quite similar to analogue subtractive synthesis when it came to programming.

There are a number of articles on how phase distortion works, so it isn’t worth going into here. Technically speaking though, it is a very neat solution. It manages to extract a wide variety of useful and accessible sounds out of the minimum gate count, in fact if the history of electronic synthesis in a parallel universe started off with digital synthesis rather than analogue, I wouldn’t be surprised if the CZ101 (or maybe the version with a full sized keyboard, the CZ1000) was their equivalent of the Minimoog.

The CZ-101 looked like a toy, with a plastic case and mini keys. But with six eight stage envelopes, dozens of waveform shapes, ring modulation and multi-timbral operation, it didn’t have to sound like one.

The pinnacle of the CZ range was the CZ1, which had velocity and aftertouch response, later they went on to produce the VZ series, with iPD (interactive phase distortion), which despite the similarity in the name is actually quite a different system, much more akin to Yamaha’s FM synthesis, and about as intuitive to program. After that unfortunately Casio stepped out of the pro/serious amateur market and only produced home keyboards.

Why was the CZ series such an also-ran? Well bad luck and cheap image probably. Compared to the DX7, a CZ101 looked like a toy, and it got to market later, so pros bought the DX7, it then featured on records, which made the sounds of the DX7 fashionable, so aspiring artists bought DX7s and as a result it featured on more records.

However, I suspect that if Yamaha had released the CZ series next to the DX series, it would probably have appeared on more records than the DX7.

Why not check out this superb CZ related website where you can hear further examples of this 80s synthesizer www.cosmosynthesizer.de.